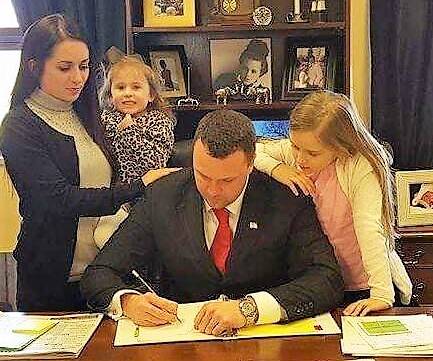 Chad Shannon with his wife, Robin, and daughters, Tenley and Gabby.

Former U.S. Marine Capt. Chad Shannon, a Middlesboro businessman, has filed a letter of intent with the Kentucky Registry of Election Finance declaring that he will seek the office of state representative, 87th District, in the May 2018 Republican primary election.

Shannon shocked the political establishment in 2016 by achieving a near win against nine-term incumbent Democratic State Rep. Rick Nelson. Shannon received 49 percent of the votes cast in Bell and Harlan counties, with Nelson prevailing by just over 400 votes.

“After much prayerful consideration and with the full support of my wife, my family, and many friends and supporters, I have decided that I will be a candidate for state representative in 2018,” Shannon said.

“I am a Christian, a conservative, and a Republican — in that order — and I feel a calling to serve, just as I did as a young man who enlisted in the United States Marines,” Shannon stated.

“Kentucky is facing challenging issues that deserve real leadership. We must solve the pension crisis the right way without taking one dime from our teachers and other employees who have worked hard and should not be punished because corrupt politicians of the past stole from them. These are my people — our people — and I will fight for them and for our mountain values of faith, family, and freedom, stronger than anybody who has ever been sent to Frankfort.”

“My top priorities as state representative will be education, jobs, roads, and fighting the drug epidemic,” Shannon continued, “These are the essential areas we must focus on to give our children a future in Southeast Kentucky. I am committed to being the most honest and hardworking voice that Bell and Harlan counties has ever had in the legislature.”

Shannon is the owner of Chad Shannon State Farm Insurance in Middlesboro. He holds a bachelor’s degree, master’s degree and a Doctor of Business Administration degree.

Shannon and his wife of 12 years, Robin, reside in Middlesboro with their daughters, Tenley, 10, and Gabby, 5.

He said he will formally file his candidacy with the Kentucky Secretary of State in November.