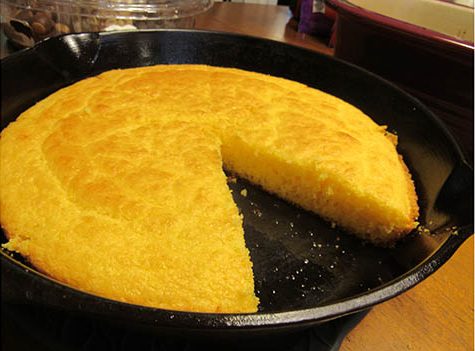 This recipe falls into the “Nailed it” category according to Sarah. (Photo by Sarah Condley)

I was sitting in my usual pew at church when two people behind me were talking, and I overheard one of them, JoAnn, mention her mom’s cornbread and how good it is. She also mentioned how simple the recipe was. After a minute or two, I turned around and asked JoAnn if she would share the recipe, and she said, “Of course.” I grabbed a pen from my purse, found a scratch piece of paper, and wrote down what she said. I was shocked that the ingredient list was short and the baking instructions were even shorter.

Over the last several months, it appears that Brad, my husband, has developed an allergy to white flour. Every time he eats homemade rolls, pie (homemade crust), cookies, etc., he gets stopped, sneezes, and is miserable.

Next to sweets, my favorite thing is bread, yum. But since it messes with Brad’s allergies, I’ve tried to steer clear of baking any, including cornbread. A lot of the recipes I have for cornbread include all-purpose flour. Since JoAnn’s recipe didn’t have any flour, I was eager to try it.

On Tuesday, after receiving the recipe, I decided I’d prepare JoAnn’s mom’s cornbread to go with our night’s supper.

I thought I had self-rising cornmeal in the freezer. Both cornmeal and flour keep very well in the freezer if you take them out of the paper packaging and put them in something airtight. (I use OXO brand containers; they have a size that holds 5 pounds of flour/cornmeal perfectly).

I turned the oven on to preheat when it was close to supper time. I like cornbread made in a cast iron skillet, so I added a spoon full of shortening to an 8-inch skillet, put it in the oven to heat, and got started making the cornbread batter.

While thinking about the self-rising instructions, I decided I’d try something different. I combined 1 cup of yellow cornmeal, 1 tablespoon of baking powder (baking powder, not baking soda – there is a difference), and 1/2 teaspoon salt. After adding the sour cream, eggs, and oil, I stirred until the batter came together. Too much stirring can make your cornbread a little tough, I think.

By this time, the iron skillet was hot. There was quite a bit of melted shortening in the pan, so I used a couple of paper towels to soak up a good deal of it.

I poured the batter into the hot skillet and into the oven it went to bake.

After twenty minutes, I checked on the cornbread, and it was beginning to brown. After a few more minutes, I removed the pan from the oven, and we were ready to head to the table to eat.

Brad and I sat down, and he said a prayer thanking God for the food and our families (especially those sweet grandbabies); he also mentioned some people we know that are dealing with health issues.

I sliced the cornbread into pie-shaped pieces, removed one for myself, and buttered it. Brad took a wedge and did the same.

While we were eating, we decided the cornbread was indeed delicious. The texture was more coarse than other cornbreads we’ve eaten, but I liked that. Brad said he liked it but wished it had a little sugar in it. (I make corn muffins with a bit of sugar in them, and Brad really likes them, but those muffins have white flour in them, so he doesn’t want to eat right now.)

Initially, we were going to take a roast, carrots, potatoes, green beans, etc., to our son Daniel’s house on Tuesday, but since his wife, Katelyn, had tested positive for COVID the day before, I asked if we could bring supper later in the week and leave it on the porch. Daniel said yes, and we decided Thursday would be the drop-off day. Since we have another grandson in Lexington, we decided to make a massive pot of vegetable soup from the roast leftovers. After leaving the meal to Daniel and family, we’d take supper to our daughter, her husband, and our 1-year-old grandson, Owen.

While the vegetable soup was simmering, I prepared both batters and baked the corn muffins in one oven and the cornbread, with a tablespoon of sugar, added in the other oven. I sat them aside to cool when both came out of the oven.

Later that day, we headed to Lexington, left a meal on Daniel’s front porch, and headed to our daughters. When we got to Sarah’s, I put the soup on the stove to continue simmering and turned on her oven to preheat (to heat up both cornbreads).

On our way home that evening, I asked Brad if he could tell that I’d added a bit of sugar to the cornbread, and he said yes, he thought it made it even better. He also mentioned that he thought the cornbread had a better texture this time. After thinking about that, I concluded that when baking the cornbread in the hot skillet, it began cooking immediately and took less time to bake than the cornbread baked in the 8×8 baking dish. Brad liked the second batch better than the first.

I’m sure you’ve guessed that since I made this cornbread twice in one week, it falls into the “Nailed it” category, and I’ve added it to my self-made cookbook. I did note that Brad preferred it baked in a baking dish versus cast iron.

Oh, and the cornbread didn’t bother Brad’s allergies, and we were thankful for that.

• Preheat oven to 400 degrees and grease an 8 x 8-inch baking dish with shortening.

• Combine all ingredients.  Pour into baking dish and bake until brown on top.