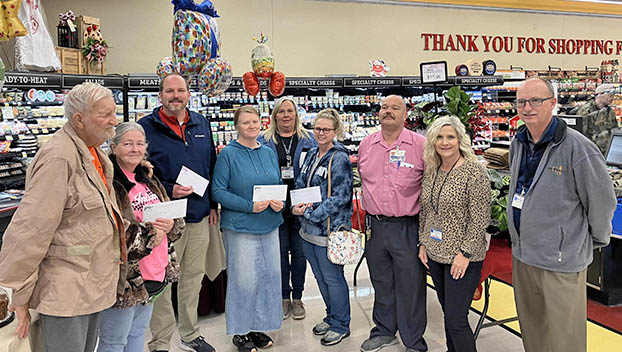 Harlan Food City Store Manager Shawn Black gave some details about the campaign during a check presentation to Harlan-based charities on Thursday at the Food City location in Harlan.

“Each year, we ask for donations for Race Against Hunger,” Black said. “Everything that is donated to us, we turn back around the following year and give it to the community.”

According to Black, all donations go back to the community where the money was raised.

“Everything that we raise here and more goes back to the community here,” Black said.

Black said a total of six Harlan County organizations received donations this year through the Race Against Hunger campaign.

According to a news release, Food City raised over $597,700 in the last year over all the store’s locations, with 100 percent of the proceeds going to benefit local hunger relief organizations. Customers donate at the checkout line with the donations added to their total bill.

“Millions of Americans need food assistance each year,” said Kevin Stafford, Food City’s vice president of marketing. “The Food City Race Against Hunger campaign is one way we can help those in need right here in our own areas.”

The Food City Race Against Hunger campaign began in 1992 and has been an annual activity ever since.

“We would like to thank our loyal customers for helping make this promotion such a huge success,” said Food City President and CEO Steven C. Smith. “Their generosity will help feed thousands of our friends and neighbors in need throughout the region.”