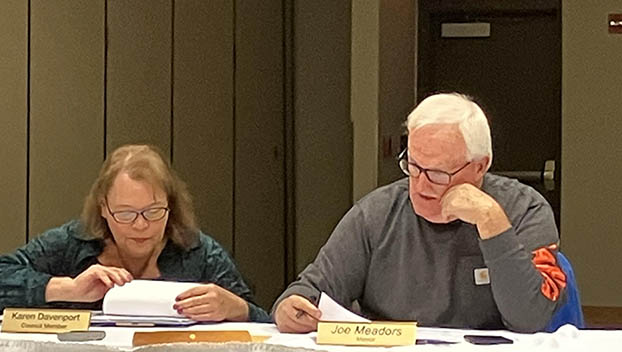 The Harlan City Council addressed issues, including the lighting situation at the roundabout, which was installed by the state at the intersection of KY 38 and KY 72, during a recent meeting.

Harlan City Mayor Joe Meadors brought the topic to the panel during his report.

“We still don’t have any lights at the roundabout,” Meadors said. “The lights that were put up by the contractor have been installed, but the state can’t get it inspected. So, KU (Kentucky Utilities) will not turn the power on to those lights until there is an inspection that certifies it has been done right.”

According to Meadors, the state has additionally stated there are no funds available to put up additional lights.

“The wiring is there. It’s underground and ready as soon as there’s a pole and lights,” Meadors said. “We were promised there would be some funding for this, as well as for the parking lot across the street, which is in pretty bad shape.”

Meadors explained the additional lights were not originally included in the plan.

“Both of those were not part of the original contract,” Meadors said.

Meadows pointed out the cost for the additional lights is approximately $28,000.

Meadors stated he is frustrated with the situation.

“I hope they get the lights up before somebody gets hurt,” Meadors said. “We’re continuing to work on it…we’ll eventually get something (done). It shouldn’t have to take this to get it done. It should have been done to start with…we’ll keep working on it.”

“We’re going to concentrate on the downtown area over the next year,” Meadors said. “There are a lot of things we’re going to have to get done.”

Meadors told the panel there has been significant interest in a grant the city is considering offering to assist property owners with upgrading the façade of their buildings.

“I’ve got two who are drafting letters and drawings showing what they want to do as far the facades are concerned, whether is paint or awnings or window treatments,” Meadors said. “I think once people start seeing it, I think it will go pretty quick. $25,000 won’t last long.”

He then mentioned there are some structures in the downtown area which have been left unmaintained and need to be addressed.

“We have some downtown buildings we’re going to have to concentrate on,” Meadors said. “We know what’s facing us. I hope we don’t have significant pushback on it…I think a couple people will probably push back…They’re either going to have to fix it, or we’re going to have to take legal action. So far, we’ve not had to do that…We’re not going to be mean to people, but we intend to be firm and intend for everybody to live under the same rules.”

Meadors told the council there are multiple buildings in the downtown area the city intends to address in the next few months.