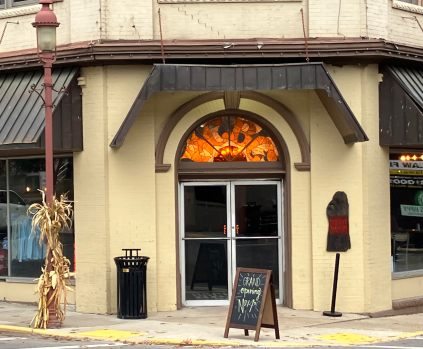 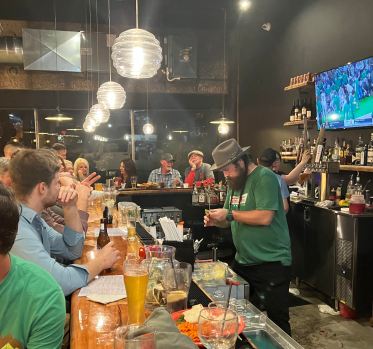 It was standing room only at the Harlan County Beer Company for the establishment’s grand opening on Friday. Photo by Joe Asher) 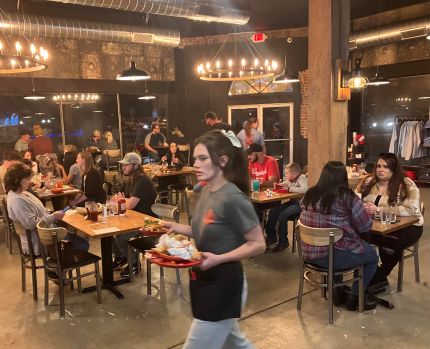 The Harlan County Beer Company held it’s grand opening on Friday, with folks pouring in to sample the food, drink and atmosphere. (Photo by Joe Asher)

Harlan County’s first brewery, The Harlan County Beer Company, has been in the works for some time now, with Friday, Nov. 4, seeing the grand opening of the restaurant and craft beer brewery after many months of preparation.

Co-owner and General Manager Jackie Bentley talked about the Harlan County Beer Company during an interview just a few days before the grand opening.

Bentley pointed out she is one of three owners, including Geoff Marietta and Gil Holland. Originally from Wise, VA, she is no stranger to southeast Kentucky, with her brother working as tourism director in neighboring Letcher County.

“I came to Kentucky for family, and I stayed for the Harlan County Beer Company,” Bentley said. “I moved here about a week and a half after the (recent) floods.”

According to Bentley, she is impressed with Marietta and Holland’s vision for the establishment and their love of Appalachia.

“I’ve seen what good restaurants can do for small towns,” Bentley said. “I’m really invested in what we’re trying to do here.”

Bentley noted businesses such as the Harlan County Beer Company had a positive impact in small communities similar to Harlan, bringing economic and cultural benefits.

“The districts I just left in southern West Virginia – which is where the bulk of my professional experience has been – when the restaurant I was working at opened, it was the only one in that district,” Bentley said. “When I left, there were several. Things tend to pop up around them.”

Bentley pointed out a larger business population is good for a downtown area.

“They have a reason to drive away from the bypass and come down here and come spend their money downtown,” Bentley said. “Things may not be as accessible, but they have heart.”

The Harlan County Beer Company has already been open on a limited basis for a few nights in advance of the grand opening.

“We’ve been trying some different things and working on training our staff,” Bentley said. “We’re seeking an atmosphere where people want to do more than just eat and leave, where they want to sit and spend time with their friends and family. We strive with our menu and our beer to have a good mix of things that honor where we’ve come from and look forward to where we’re going.”

The menu contains multiple items local folks have been familiar with their entire lives, with a native Harlan Countian making sure the recipes are legit.

“We have a woman on our staff, Heather Hughes,” Bentley said. “She was raised in Harlan and then moved to Somerset. She made sure our cornbread and soup beans and our chicken and dumplings were as traditional as possible.”

There are also menu items unique to the restaurant.

“We have a cheeseburger that has apple butter and jalapeño moonshine ale made with Kentucky Mist Moonshine from across the mountain, so we try to take some risks but make sure we honor where we came from as well,” Bentley said. “I hope that resonates with our guests when they’re in here spending time.”

Bentley explained beer would be brewed on the premises in the near future.

“Right now, our beer is being contract brewed in Louisville by Amelia Pillow. She’s an extremely talented brewer,” Bentley said. “In January, you’ll see us close for a little bit, and we will be able to brew on-site after that time.”

Along with a full bar – including a vast selection of Kentucky bourbons – the Harlan County Beer Company will feature menu items for all ages.

“We are a family-friendly environment,” Bentley said. “We have a kid’s menu with a coloring sheet on it that’s a little more affordably priced so people can bring their kids here. It comes out on a Frisbee they can take home with them.”

“We want to be the place where people bring friends who come from out of town because it makes them proud of their hometown,” Bentley said. “That’s what we’re going for.”

Bentley mentioned she appreciates the assistance from many people who have helped to get the Harlan County Beer Company ready for operation.

“I want to thank everybody,” Bentley said. “We’ve had so much to learn, and people have come in here, and they’ve waited a little longer and given a lot of really helpful feedback that has become actual changes to the menu. This menu is Harlan. I just can’t thank people enough for giving us that criticism and being open with us, and wanting us to succeed. It’s been a really wonderful experience, and I’m so grateful to be a part of this community.”