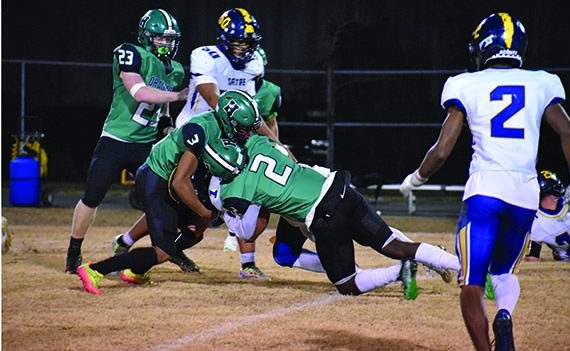 Harlan blanked Sayre to earn a playoff date with Pikeville in the regional semifinals. (Photo by Christin Freeman)

Pulling out a hard-fought win over Sayre in the regular season, the Harlan Green Dragons made a statement in the first round of the KHSAA Playoffs on Friday at Joe Gilley Athletic Complex.

Harlan claimed a 50-42 win over the visiting Spartans on Sept. 23

The Green Dragons got three touchdowns from quarterback Donovan Montanaro and two others from Darius Akal as Harlan rolled to a 42-7 win to earn its first playoff victory since 2015.

The 8-3 Dragons will advance to the second round, visiting Pikeville (8-2) on Friday.

The Green Dragons’ only road playoff win ever occurred in 2009 at Pikeville.

Harlan gained 410 on the ground with the help of 63 carries.

Montanaro rushed for 36 yards and completed both passes for 24 yards.

“Our defense totally shut down a really good offensive team,” said Harlan coach Eric Perry. “Coach (Jerry) Perry had a great game plan, and our kids went out and executed it. Our kids were flying around and swarming to the ball with bad intentions.”

Sayre only had six first downs in the first three quarters.

With 6:40 left in the second period, Harlan’s Noah Kirby tackled Charlie Slabaugh in the end zone for a safety.

A long kickoff return by Austin set the Dragons up for another score. Akal scored on an 8-yard touchdown run at the 3:23 mark to extend Harlan’s lead to 14-0.

Following an Austin interception, Montanaro capped a four-play drive with a 1-yard TD run with 1:29 remaining in the second quarter, making it 20-0 at the half.

A 10-play, 60-yard Harlan drive to open the second half was capped by Akal’s 11-yard touchdown run. Middleton’s conversion extended the lead to 28-0.

“Offensively, we just kept doing what we do,” said Perry. “Our offensive line was totally dominant, and our backs ran with a purpose. I thought Ward, Akal, and Middleton complemented each other very well. I thought our secondary really put the clamps on their receivers, and we were able to get some good pressure on the QB with our D-Line, and our backers had a great game.”

“It was good to see Rylee Mefford and RW Sanford back at full strength,” said Perry. “Their presence was felt in a big way tonight as well.”

Sayre ended the season with a 5-6 record.