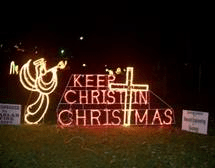 Marking the kickoff of the Christmas season, Harlan County Christian School’s 16th installment of the Harlan County Celebrates Christmas Light Display at the Shriner Fairgrounds in Putney is preparing to provide plenty of Christmas spirit for all to enjoy.

During a recent interview, Diana Hall, Harlan County Celebrates Christmas Light Display Coordinator, ran down some display details. She noted the display got its start in 2007.

According to Hall, the display grew yearly, with new lights and displays added.

“This started out as a fundraiser for the Christian School,” Hall said. “Sponsors are found for each light, and then donations are accepted at the light display. In turn, we advertise for the sponsors.”

While donations are appreciated, the display is free and open to the public, Hall said. She explained the school collaborates with the Shriners for the display.

According to a press release, the display’s opening night will be Friday, Nov. 25. After that, the display will be open every Thursday, Friday, and Saturday night from 6 p.m. until 9:30 p.m. through and including Christmas Eve. In addition to every Thursday, Friday, and Saturday, the light display will also be open on Monday, Dec. 19, through Christmas Eve on Dec. 24. The Shriner Train will be running from 6 p.m. to 9 p.m. on Fridays and Saturdays.

Hall mentioned she began working on the display following the sudden passing of Harlan County Christian School Volunteer Sue Ford, who was the originator of the display.

“She wore so many hats. She was an amazing woman,” Hall said. “When she passed away, it took several people to pick up her responsibilities, and I kind of took the light display and started working with it and adding to it to appeal to sponsors.”

Hall said each car that goes through the display receives a card listing all the sponsors for the event.

“It lets the public know who made the display possible,” Hall said. “It’s a good way of advertising because we start the day after Thanksgiving.”

Hall said rides on the Shriners Train appeal to young and old alike.

“It’s a really festive occasion,” Hall said. “We give out free hot chocolate, free candy canes. They can go around as many times as want. It’s free to the public. We love Harlan County, and we love the people of Harlan County.”

The display may be closed for the night should inclement weather occur.

“Any changes to the schedule will be posted on the school’s website at hccswarriors.com,” Hall said.

For more information about the display and Harlan County Christian School, visit hccswarriors.com or call 606-574-1900.