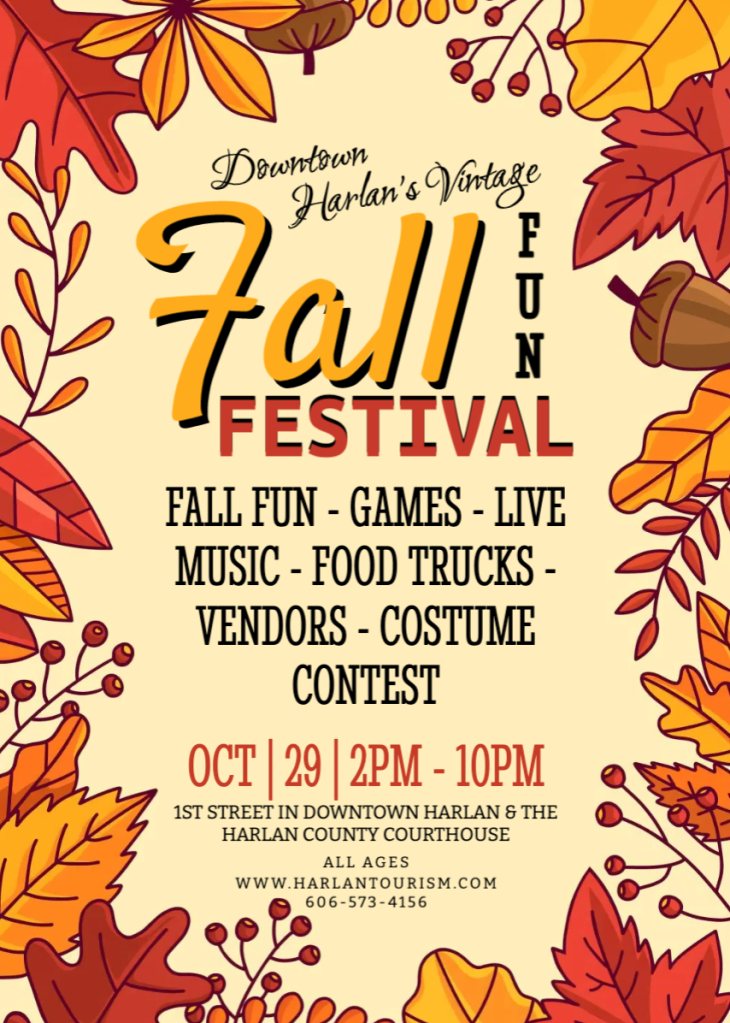 The city of Harlan is preparing for a newly conceived fall festival, with the inaugural event set to take place in the city on Oct. 29.

“We’re calling it vintage because we really want to invoke a sense of nostalgia,” Pennington said. “We want to throw back to the days of school carnivals and there would be hay bales, ring toss games, that kind of thing. It just throws back to a time when life was simpler and a lot more fun.”

Pennington said the festival came about because of a large amount of interest in such and event.

“We’ve had such an interest, with people coming to us and saying we really need a Fall festival,” Pennington said. “We try to listen to what the community wants to see, so we decided to go with it.”

The festival will feature a number of attractions for folks of all ages to enjoy.

“There will be different kinds of carnival games going on throughout the festival,” Pennington said. “We’ll have a slew of vendors including a pizza and pasta vendor, hot dogs, candy apples, lots of baked goods and homemade candy.”

There will also be multiple vendors selling items such as t-shirts, crafts, artwork, and various other items.

“Of course we’re also going to have live music going on,” Pennington said. “We don’t the lineup fully set yet. We’ve got some local musicians and we’re also looking at some regional musicians.”

Pennington mentioned the music acts will be drawn from multiple musical genres.

“It’s across the board,” Pennington said. “We’re looking to put on a bunch of different genres of music on the stage.”

Pennington said there are already approximately 30 vendors expected to participate in the festival.

While the event is a fall festival, the fact that it takes place close to Halloween will not be ignored. There will be a costume contest for those who wish to show off their costume creativity and a ghost walk available for those interested in the ghostly history (with true crime roots) of Harlan. To take part in the ghost walk, just be at the gazebo on the courthouse lawn at 5 p.m.

There is still time to be a vendor at the event.

“If anybody’s interested in being a vendor, they can contact me at the Harlan Center at 606-573-4156, or by email at harlantourism@gmail.com,” Pennington said. “We have been contacted by a lot of different vendors that we haven’t seen set up at other festivals here. You’ll see some familiar faces there because they do set up at the Poke Sallet Festival or the Festival of the Mountain Masters, but then we’ll have quite a few new vendors.”

Pennington pointed out the hope is for the festival to be such a success it will added to the regular schedule of events in coming years.

The festival will take place on Oct. 29 in downtown Harlan.

For more information on this and other events, go to harlantourism.com or the Visit Harlan County Facebook page.