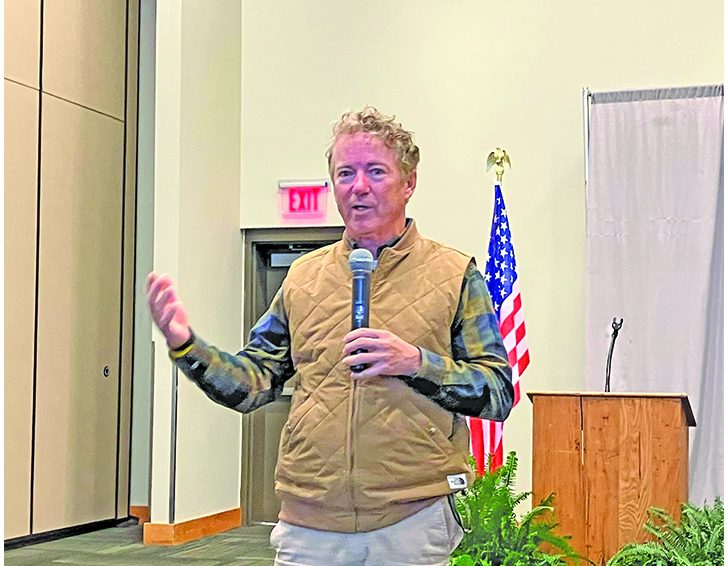 Senator Rand Paul made a stop in Harlan on Monday, speaking to an audience at the Harlan Center. (Photo by Joe Asher)

Senator Rand Paul (R) stopped in Harlan on Monday, speaking to an audience including state legislators, local officials, and interested citizens at the Harlan Center.

After a quick introduction, Paul addressed the crowd.

“We’re excited to be here,” Paul said. “We’ve been traveling across the state. We’ve been in about 60 cities in the last two months.”

Paul said the number one complaint he has heard from citizens is the increased price of gasoline and other necessities.

“Fuel prices have gone up,” Paul said. “Prices in the grocery store have gone up, and the wages just aren’t keeping up with it.”

Paul pointed out that the rising costs severely impact many on a fixed income.

“Gasoline is up 45 percent over last year,” Paul said. “Eggs are up 36 percent. Beef’s up over 20 percent…what should the government do? One thing the government should do is quit borrowing so much money. Quit spending money we don’t have.”

According to Paul, the federal government has taken an approach that results in inflation.

“Kelly sent me a story that I just looked at as we were driving here,” Paul said. “They are experimenting with a virus where they have taken COVID – the virus that infected us – and they’re switching parts around with the first virus because it’s now changed. They’ve found one that has 80 percent mortality in the laboratory.”

Paul stated this is gain of function research such as Dr. Anthony Fauci funded in Wuhan.

“I finally got an amendment to say no more. We won’t send more money to Wuhan,” Paul said. “It passed unanimously. Then, it went to the House, and Nancy Pelosi killed it…they stripped it out of the bill.”

According to Paul, gain of function research is still being done.

“This is still a problem,” Paul said. “We’re doing this research in our country. They were doing it in Wuhan. All of the evidence a mountain of evidence stacks up, saying this came from the lab. And yet, we’re still doing this research, and it could happen again.”

According to Paul, lockdowns during the pandemic were a mistake.

“We need to decide as a country we’re not going to lockdown again,” Paul said. “It was a mistake. It killed the economy, and we’re still suffering all these supply chain issues, most of those are from…the destruction of closing the economy down, and now as we’re unwinding, we’re still having problems.”

Paul said the resulting inflation has hurt the working class.

“We need to understand this is the unintended consequence of a government that offers you something for nothing,” Paul said. “As I look forward to where we’re going as a country, I try not to be pessimistic. I think we have a great country. I’ve been from one end of Kentucky to the other, and I’ve been from one end of the United States to the other. What I see is a proud people that does hard work and largely does pretty well.”

Following Paul’s speech, he addressed a question concerning FEMA’s reported sluggish response to claims from citizens brought about by the recent flooding in southeast Kentucky.

“I think there’s too much red tape with FEMA, and there has been for a long time,” Paul said. “When I came out to the floods, to Perry County, I think the judge over there told me they still had outstanding claims from 2020. So, we work on this all the time.”

Paul said part of the issue is about different styles of government.

“The state legislature has a rainy-day fund with $2 billion in it, $200 million came quickly,” Paul said. “That’s the better way to run it. We should have a fund, and we should dispense a check. It should be much quicker than it is. FEMA has a history of not being very efficient…red tape is a big part of that. We need to work on seeing if we can get them to act more efficiently. What we do in the meantime is we call them, we bug them until they finally do their job.”