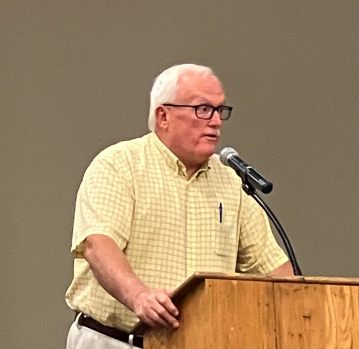 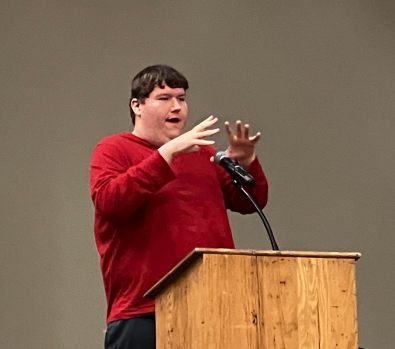 Dakota Hensley, challenger in the race for city of Harlan mayor. (Photo by Joe Asher)

The race for Harlan City Mayor drew the two candidates to the Harlan Center to participate in the Harlan County Chamber of Commerce’s Candidate Forum recently.

“How do you bolster the city’s tax base outside of alcohol sales in order to clean up downtown and offer citizens more incentive to participate in local events?” Robinson asked.

As the incumbent, Meadors had the first chance to respond.

“The way that you get business back downtown, you have to clean up your downtown,” Meadors said. “Nobody wants to go in an area that’s dirty and has trash in the streets. When I ran four years ago…I wanted to clean up this town. We’re very fortunate to be where we are.”

Meadors pointed out the city must be taken care of first.

“People always want to talk about what you can do to bring industry or new jobs in,” Meadors said. “You’ve got to make yourself attractive to outsiders to make them want to operate a business or even move here. To that end, I think we’ve done a wonderful job.”

Meadors said he had worked well with other city entities.

“I’ve been blessed to work with a wonderful city council,” Meadors said. “We have a Code Enforcement Board that has worked well. Since I’ve been mayor, we’ve torn down five commercial structures and about nine residential structures. We’re working on two as I speak. It’s a tedious process, sometimes you have to go through the court system, but you have to do it. You have to clean up your town. You have to give people a sense of pride for being here.”

Meadors mentioned most have been receptive to the city’s efforts.

Hensley then responded to the question.

“First we need new businesses,” Hensley said. “You can’t say I’ll bring the businesses. You have to actually have a plan to do it. My plan is to have a small business incubator. It will provide funding; it will provide, it will teach people how to run a business. The center would provide the perfect space.”

Hensley stated the old buildings around the city are commercial spaces.

“We’ve seen what the Harlan Beer Company made,” Hensley said. “If you give these old buildings to an entrepreneur, they can bring them back…the city itself cannot do that, but private people can.”

“I’d also like to have startups,” Hensley said. “We can have a regular business incubator which can provide funding for these technology and agriculture startups, and these could eventually be billion-dollar companies.”

Robinson then asked the candidates what they would do to keep the current momentum of businesses opening in Harlan going.

“Coal is dead. It will not come back. It’s been dead for years,” Hensley said. “It’s been on the decline since the 1920s. We should actually have a plan to create new industries.”

Robinson repeated the question for the next candidate.

“We’ve seen recent energy in downtown Harlan with the opening and upcoming opening of several new businesses and attractions,” Robinson said. “What will you do to build on this momentum to bring more jobs and people to the city of Harlan?”

Meadors talked about the city’s infrastructure improvements during his response.

“We already have some infrastructure,” Meadors said. “We have a strong municipal water system that I am happy to report is on the verge of about a $5 million improvement. Not only does that water works serve the city of Harlan, but it serves more customers outside the city limits than it does within the city limits.”

Meadors also mentioned the city’s water system sells water to the Black Mountain Utility District, which provides water to many customers outside the city.

“We have to have adequate sewer,” Meadors said. “The city of Harlan operates and maintains a rather large sewer plant.”

“That is infrastructure improvement,” Meadors said. “You have to have that before you can even talk about bringing somebody in here. You have to have water, sewer, and electricity. We will have all of those, and I am happy with the progress we are making.”

Voters go to the polls on Nov. 8 to cast their votes in the general election.