Dragons fall on the road against Williamsburg 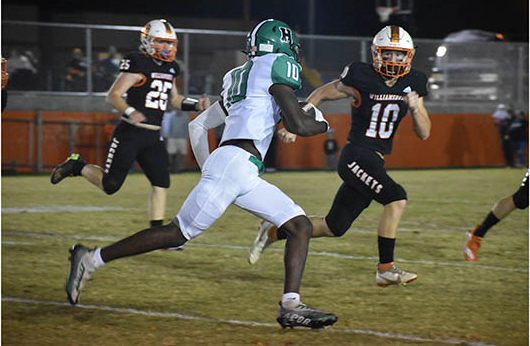 The Green Dragons lost a narrow contest on the road Friday. (Photo by Christin Freeman)

A questionable pass interference call late in the game against Harlan in a critical district showdown at Williamsburg proved costly as the Yellow Jackets stretched its district winning streak to 23 games on Friday, following a 26-16 win over the Green Dragons.

This may have been Harlan’s best chance against the Jackets in several years. More to the season, and more wins will come for the Dragons.

The victory for the Yellow Jackets snapped a two-game losing streak.

Senior quarterback Syndey Bowen scored four touchdowns for Williamsburg. He rushed for 111 yards on 22 carries and completed nine of 15 passes for 71 yards.

The Yellow Jackets gained 252 yards on the ground and 323 yards for the game offensively.

Junior fullback Hunter Thomas led Williamsburg on the ground with 138 yards on 22 rushes. Nate Goodin, a sophomore, caught five passes for 47 yards.
Bowen scored on a 5-yard run with 6:44 left in the first quarter.

The Yellow Jackets’ defense held firm and needed little time to score again as Bowen went in on a 10-yard keeper at the 5:43 mark of the opening period. Thomas’ two-point conversion gave Williamsburg a 14-0 advantage.

With 1:58 remaining in the first quarter, Harlan got on the scoreboard following a 12-yard TD run by Akal. Montanaro’s two-point conversion pulled the Dragons within 14-8.

Bowen scored his third touchdown early in the second quarter on a 26-yard keeper. The Jackets led 20-8 at halftime.

Both teams went scoreless in the third quarter.

The Green Dragons made things interesting following a seven-yard touchdown run by Jayden Ward as Harlan cut the deficit to 20-16 after Montanaro added the two-point conversion.

When the Dragons were whistled for the pass interference call, Williamsburg seemed to take control of the game. On the next play, Bowen scored on a 13-yard TD run with just over eight minutes to play.

The Dragons were hampered by 134 yards in penalties for the game. Harlan was whistled 16 times. The Jackets were called for 11 penalties for 110 yards.

Williamsburg (4-2 overall, 1-0 district) looks to win another regular district championship on Friday against the Pineville Mountain Lions (7-0, 1-0). Kickoff is slated for 7:30 p.m.

The Mountain Lions of Pineville will visit Harlan on Oct.21 in the Battle of 119.

The Green Dragons will close the regular season on Oct. 28 at Leslie County.