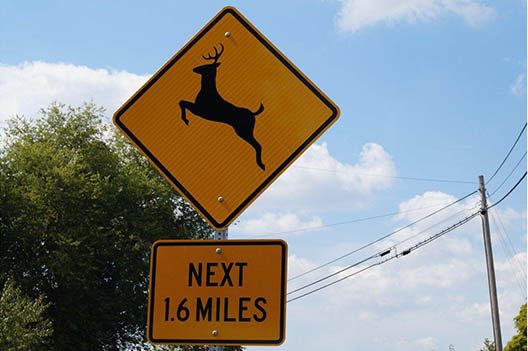 The Kentucky Transportation Cabinet has issued an annual Antler Alert to remind drivers that the peak season for deer-vehicle collisions has arrived since about half of all such crashes occur during the last three months of the year.

“October, November, and December bring a noticeable increase in highway collisions involving deer,” said Transportation Secretary Jim Gray. “We’d like to remind drivers to be especially watchful for deer and other wildlife on the move at dusk and at night when poor visibility is already an issue.”

“The onset of autumn brings about physiological changes in male deer,” she stated. “Bachelor groups of bucks break up and expand from their core area, leading to increased deer movement and the possibility of being hit on the roadways.”

Autumn harvesting also contributes to this movement as deer are forced to range farther afield for forage and hiding places.

In Kentucky, 2,988 highway crashes involving deer were reported to police in 2021, according to crash data used by the Kentucky Office of Highway Safety to monitor highway crash trends. That was an increase of about 100 crashes from 2020.   There were three reported fatalities and 25 serious injuries due to deer collisions in 2021.

On average, U.S. drivers have a 1 in 116 chance of a collision with an animal. Kentucky ranks above the national average and 18th among the states at 1 chance in 88. Drivers in neighboring West Virginia run the highest risk, 1 in 37, according to State Farm Insurance.

The Transportation Cabinet offers their tips:

–Slow down immediately upon spotting a deer crossing the roadway; they tend to travel in groups.

–Don’t swerve to avoid a deer, which can result in a more serious crash with an oncoming vehicle or roadside object.

–In the event of a crash, keep both hands on the wheel and apply brakes steadily until stopped.

–Keep headlights on bright at night unless other vehicles are approaching.

–Eliminate distractions while driving: Phones down!

–Drive defensively, constantly scanning the roadside, especially at dawn and dusk, when deer are most active.

Drivers are asked to report all deer-vehicle collisions to police. Transportation Cabinet traffic engineers use the crash data to aid in placing deer-crossing warning signs and other safety measures.