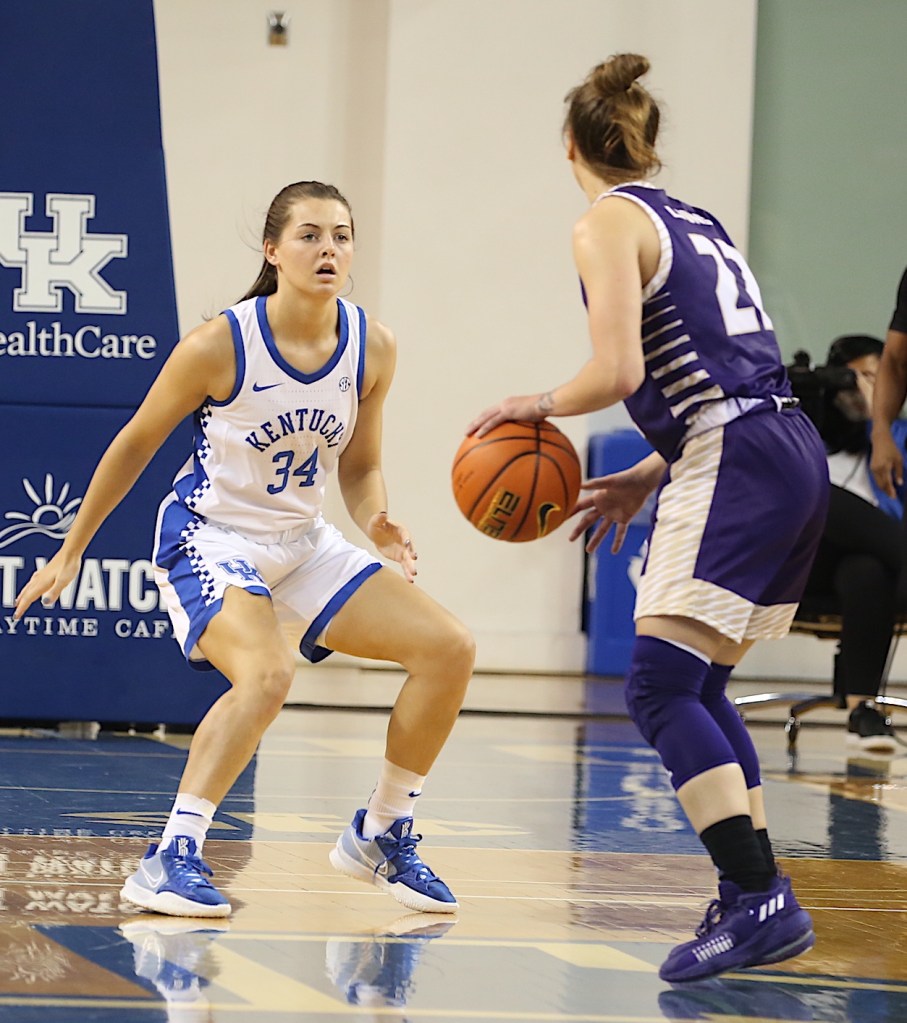 She’s played in 46 career games, but Kentucky senior Emma King says it has been “crazy” how fast her basketball career has gone by, and she feels like it has been a “whirlwind.”

“It has been such a fun time to be able to be part of some amazing stuff here. It’s truly been a blessing,” said King, a three-star prospect out of Lincoln County (Ky.) who picked UK over Florida, Wisconsin, Louisville, and Dayton.

There is one big change for King — there is no Rhyne Howard on the team this year. Howard was a three-time All-American and recently was named WNBA Rookie of the Year. She was UK’s leading scorer and playmaker for three seasons.

“Not having Rhyne just gives other people an opportunity to step up and be able to prove themselves,” King said. “We always knew we had Rhyne to rely on, and she was such a big part of the program we could rely on her. If it went bad, it was like, ‘Okay, we have Rhyne.’

“Now we have to see who is going to step up and make plays when we face adversity. It’s going to be interesting. We have 15 players, and 10 are new — six freshmen and four transfers. Coach (Kyra) Elzy is doing a good job slowing things down. Only five of us have played together, and it has been a big adjustment to figure out who brings what to the team.”

King played in 26 games last season and started twice. She was a prolific 3-point shooter in high school but was just 3-for-32 from long range last year — an area Elzy is confident she will improve dramatically this year.

King has focused just as much on being a more vocal leader, something that does not come easily for her.

“I have always tried to lead by example. That comes more naturally for me,” King said. “Coach Elzy wants me to be more vocal. I have had to step up. I have always been someone to encourage others, but now I have to break things down for younger players.”

She’s got plenty of help from fifth-year senior Blair Green — ‘’she’s been my girl since I have been here” — who missed last season after rupturing her Achilles tendon in preseason workouts.

“I am excited to take the floor with her again. She has worked so hard. I have nothing but respect and praise for her. She had one of the injuries with the longest recovery, but she never let it get her down. She put in the work, and I can’t wait to see the results of what she’s going to do this year,” King said.

King knows everyone may have to make concessions because of the overall depth and talent on this year’s team.

“It is important we all stay true to who we are as players,” King said. “We have so much diversity in what each player brings to the team. We have so many players than genuinely think pass first.

“That is not something I have experienced a lot in college basketball. That is their first thought. What is the right pass to make? We have 15 players who believe that.”

Kentucky made an incredible run to win its first Southeastern Conference Tournament championship last season — its first tourney title since 1982. The Cats beat No. 1 South Carolina, the eventual national champion, in the SEC title game.

“After we beat LSU (in the semifinals), there was no doubt in our minds that we were going to win. Nobody could tell us we were not going to beat South Carolina,” King said. “Going into this season, we have heard, ‘You won the SEC tournament, and now you have a target on your back,” but others are saying we lost everybody off the team and won’t do half of what we did last year.

“Our mindset is we are still Kentucky basketball. Yes, this is a new team, but we want to find a way to do that again. Everybody came here to win.”

King has been impressed with all 10 newcomers, but Maddie Scherr — a two-time Kentucky Gatorade Player of the Year at Ryle High School and Oregon transfer — has really impressed King.

“Kentucky fans are going to like Maddie Scherr a lot. Just the way she plays and what she brings to this team is going to be special,” King said. “We played her our senior year (of high school) when Ryle won the state championship, so I knew she was a really good player already.”

Kentucky opens the season on Nov. 7 and has four straight home games before playing in the Baha Mar Hoops Pink Flamingo Championship in Nassau. The Cats will play Virginia Tech and Dayton in the Bahamas.

“Since our four-year out-of-the-country trip got called, we get more of an extended stay, and I think we will be there for six days. We play two games, and then Thanksgiving will be our fun day. We are all really looking forward to this.”