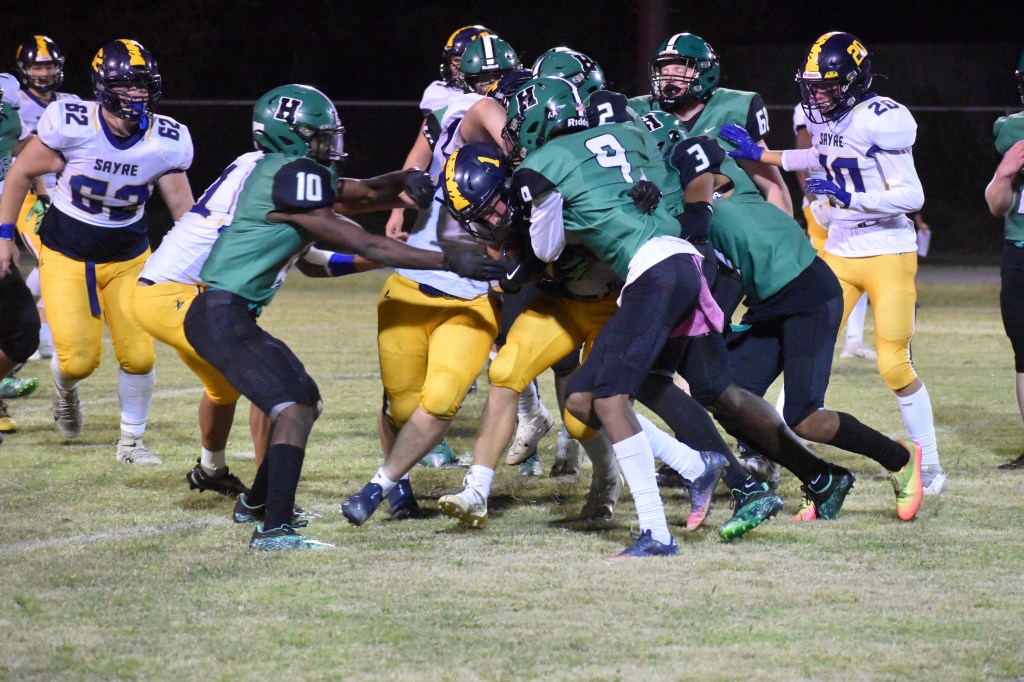 Harlan won a wild one over visiting Sayre on Friday night. (Photo by Christin Freeman)

It was a game that went back and forth from the start to the exciting end, with Harlan winning 50-42 to improve to 4-1 on the season.

Visiting Sayre scored a touchdown with 5:07 left in regulation to take a 42-38 advantage.

The Green Dragons used their running attack to fight back with a 10-play, 52-yard drive. Senior running back Jayden Ward had nine consecutive runs for a total of 48 yards. The Dragons had two penalties. With Harlan facing third-down-and-six from the nine, junior quarterback Donovan Montanaro kept the ball and went in for the TD, giving the Dragons a 44-42 edge.

Sayre got the ball on its own 48-yard line with 18 seconds to play. Sophomore quarterback Luke Pennington dropped back and released the ball into the hands of Harlan’s R.W. Sanford. The senior linebacker went around the right side and scored on a 58-yard interception return as time expired.

“We put an extra defensive back in and took a linebacker out. R.W. made a huge play. We were yelling get down, get down! Then it was score, score,” said Harlan coach Eric Perry.

“We wanted to milk as much clock as we could. We knew we wanted to come out and pound the football. Our kids were getting a little frustrated. We wanted to stick to what we do,” he added.

The Dragons managed to keep the ball on the ground and win the time of possession.

“We pounded the ball and milked the clock. That’s what we had to do,” said Perry. “We were fortunate to come out with a win.”

Ward, who was held to seven yards in the first half, ended the game with 149 yards on 29 carries. Darius Akal followed with 65 yards on eight rushes. The Dragons had 249 yards on 50 carries.
Montanaro completed both of his passes for 68 yards. Will Austin had both receptions.

Pennington led Sayre with 10 of 18 passing for 169 yards. Brock Coffman had seven receptions for 128 yards.

“We knew this would be a battle,” said Perry. “Our biggest concern was we’d come out flat and a very emotional game last week (22-21 loss at Middlesboro), and that’s exactly what happened. They’ve got a good team. Were they as good as last year, not quite. But they’re pretty darn good.”

Coffman scored two touchdowns as Sayre opened the game with a 14-0 lead.

Brady Atkins was attempting to punt the ball, but the ball sailed over his head, and the punter kicked the ball out of the end zone for a safety.

Montanaro scored on a 1-yard keep early in the second quarter to even the game at 14-all.

Sayre fought back as Pennington connected on a 39-yard TD pass to Coffman. Atkins’ kick was good.

The Green Dragons needed four plays to score as Montanaro found Will Austin for a 36-yard touchdown pass with 3:05 to play before halftime. Ward added the two-point conversion as Harlan led 22-21.

Sayre used a nine-play, 60-yard drive to score as Pennington hit Charlie Slabaugh for a 7-yard touchdown as the Spartans went into the locker room ahead 28-22.

Harlan took the second-half kickoff and marched 51 yards on 10 plays, with Ward capping the drive with a 3-yard TD run at the 5:48 mark. Ward’s conversion made it 30-28.

The Green Dragons started their next possession on the Sayre 38.

Ward once again carried the load with eight carries and scored from the 1 with 11:11 remaining. Ward’s conversion run made it 38-35.

“R.W. really had a good game,” said Perry. “Even though we didn’t play well on the defensive end, R.W. did a lot of good stuff for us.”