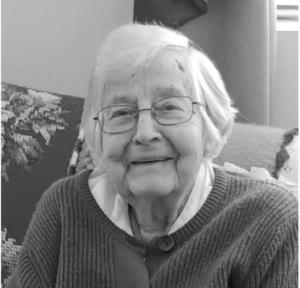 She was preceded in death by her parents John Morgan and Isabel Sadler Smith; her sister Jane Smith Woody and brother John Morgan Smith Jr.

She was a retired RN who spent the last 30 years of her working life at the Harlan Appalachian Regional Hospital. She earned her nursing degree in 1945 from Louisville General Hospital. She worked in several places before moving back to Harlan in 1957 where she was an active member and ordained elder in the Harlan Presbyterian Church.

After retiring she moved to Lexington where she became an active member at Second Presbyterian Church, including the Present Word Sunday School class, the Beth Wachs Circle, and Operation BUILD. She loved to travel and was very involved in her community. She volunteered with Operation Read as a tutor and at the Family Care Center in the medical/dental clinic. She loved being part of the Warm Up America group (volunteers who knitted afghans for seniors in nursing homes and dialysis patients). She was a long-time participant in the healthy brain aging research project at the Sanders-Brown Center on Aging at the University of Kentucky, helping to find a cure for Alzheimer’s.

Among the things she enjoyed were gardening (flowers and vegetables), reading, cooking, baking (jam cakes and stack cakes more delicious than words can say) and listening to music. She also was an avid UK football and basketball fan.

A memorial service will be held at 11 a.m. on Saturday September 24 at Second Presbyterian Church, 460 E. Main St., Lexington, KY 40507 with a lunch reception after the service.

In lieu of flowers she requested memorial contributions be made to the Sanders-Brown Center on Aging, P.O. Box 34184, Lexington, KY 40588 or Second Presbyterian Church.