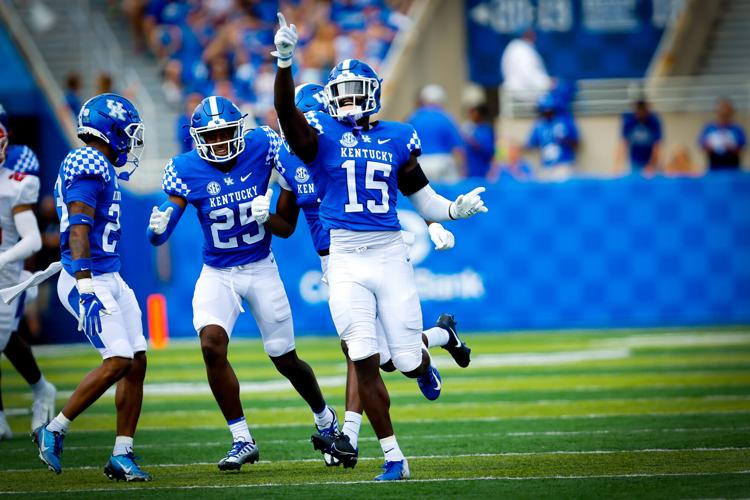 Kentucky's defense recorded its first shut out since 2009 in Saturday's 31-0 win over Youngstown State. (Photo by Les Nicholson/Kentucky Today)

On a day that Kentucky honored football coach Mark Stoops on becoming the program’s winningest football coach, it was appropriate the Wildcats’ defense tossed the school’s first shutout since 2009 with a 31-0 win over Youngstown State. The 2009 shutout was over Miami (Ohio) 42-0.

Seven Kentucky coaches and players hail from the northern Ohio town known for its blue-collar work ethic and the defensive-minded Stoops enjoyed watching his defense stifle the Penguins’ offense from the opening possession. Youngstown was held to 54 yards of total offense in the first half as No. 9 Kentucky (3-0) opened up a 21-0 lead at intermission. The Penguins finished with 192 yards of total offense as younger players preserved the shutout.

“We have been trying for five years to put a doughnut on the board,” said Brad White, Kentucky’s defensive coordinator. And referencing the veteran players on the sidelines watching, especially linebackers DeAndre Square and Jacquez Jones. “They were so excited and into the last drive and proud of those guys for finishing it.”

Cornerback Carrington Valentine played a key role in keeping Youngstown (2-1) off the scoreboard. He broke up an intended pass to former Wildcat Bryce Oliver in the end zone to stall one Penguin drive. Later, after getting flagged for pass interference, he intercepted a pass in the end zone with an acrobatic catch.

“I just lose myself in the game. It’s always a defensive goal to have a shutout,” he said. “I was going to bring the ball out (on the interception) but I saw a lineman, so I played it safe.”

Kentucky continued to lean heavily on quarterback Will Levis offensively as the ground game struggled to find its footing while senior star running back Chris Rodriguez serves the third game of a four-game suspension. The Wildcats only mustered 103 yards rushing, but Levis was 27-for-35 for 377 yards passing and two touchdowns and rushed for another. He connected with 10 different receivers, with scoring passes of 3 yards to Dane Key and 2 yards to Chris Lewis.

The Wildcat offense was slow coming out of the gate, punting on their first two drives and Levis was picked off at the Youngstown 3. Levis finally got the Wildcats on the board on a keeper from the 1 with 13:34 left in the first half. Kavosiey Smoke led Kentucky in rushing with a 66 yards and a 7-yard touchdown. But Kentucky was slowed by some false start penalties, four fumbles despite losing just one, and 10 tackles for loss including four sacks.

“I have to look at the film, the first pick maybe the wide-out didn’t keep coming. The second I thought the read was right but he didn’t step up in the throw, and we talked about that,” said Rich Scangerello, offensive coordinator. “I was disappointed in the way we came out today. We talked about taking things on the right way and being detailed and I didn’t think it was good enough tonight and if we don’t improve, we will have some issues down the road.

“Pre-snap penalties completely unacceptable and turnovers is a lack of regard for the ball. That will be taken care of as long as I’m the coach here. Either you take care of the ball or you don’t play. We only lost one (fumble), but had four on the ground. If (you) line up and jump offsides, you won’t play.”

Kentucky will have a chance to right those offensive hiccups next Saturday night against MAC foe Northern Illinois at 7 in Lexington.