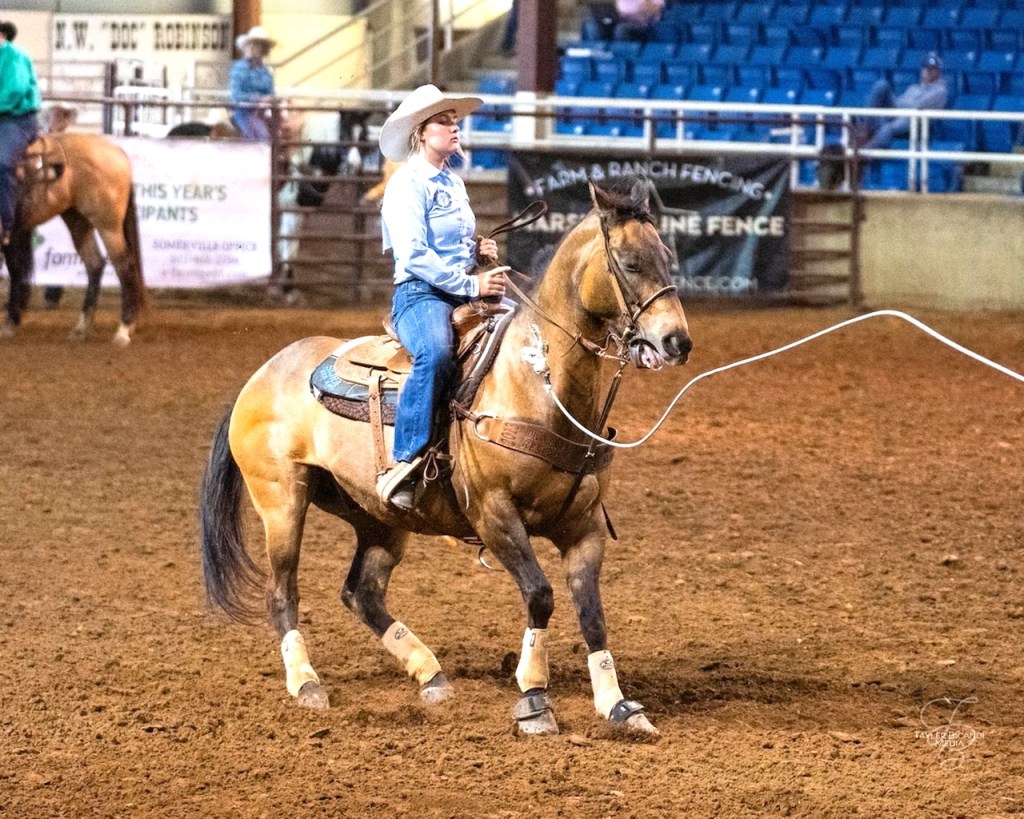 Her friends locally have learned that Addey Lawson, 17 and a junior at Boyle County High School, does not have a lot of spare time to do things with them.

“My friends understand I am always doing something with horses,” said Lawson. “Horses are like high school athletes. They need exercise, training, clean stalls, and chiropractic medicine. They know I won’t be out at football games and stuff like that.”

“This is her one and only thing. This is about all she does,” Lesley Lawson, Addy’s mother, said.

Addey Lawson is good at what she does, too. As a freshman, she qualified for nationals in three events and was the 2021 National High School Rodeo Rookie Cowgirl of the year. She was ninth in the world in breakaway roping and 10th in world team roping with partner Trever Thomas of western Kentucky.

Recently she did even better in the 2022 nationals in Gillette, Wyoming, as one of over 10,000 contestants. Her mother said it was a 22-hour drive with the horse trailer to get there and they were gone for 13 days.

She was fourth in breakaway roping — an event she says she has to practice all the time because of the connection and timing she must have with her horse to rope a calf.

“I started rodeo in kindergarten,” she said. “My dad grew up showing cattle and farming, so rodeo is just natural to us. Mom and dad both team roped. My dad has figured out a lot about what I do and helps me a lot.”

She also gets help from Ronnie Hyde of Indiana, an accomplished rodeo star himself.

“He is like another dad to me. He is quite the role model and helps me in so many ways,” Lawson said.

Lawson competes in at least 14 rodeos annually. A normal Friday routine is to hit the road for a rodeo as soon as her mother’s school day ends (she is principal at Camp Dick Robinson Elementary in Garrard County). The family has the trailer packed and she usually takes at least two horses and sometimes four to compete in her various events.

“We have live-in quarters in the trailer. We had three beds, so there’s enough space for us to stay and we haul the horses in the back,” Lawson said.

Rodeos draw a variety of contestants competing in everything from barrel racing to breakaway roping to team roping to pole bending and more. She competes in barrels, pole bending, roping and team roping.

Lawson said the top four in points in each event in the state association qualify for nationals. However, she admitted it’s “pretty unusual” for anyone from Kentucky to place in the top 10 at nationals — something she has done three times already.

“The state finals are the deciding factor of which four go to nationals,” she said.

The state high school rodeo championship is later this month in Louisville. Lawson said there are rodeos all over Indiana and Kentucky, including several in Liberty.

Lawson has lofty goals for herself. She would like to earn a rodeo scholarship and probably go west to school to pursue her lifelong dream.

“It’s a bigger world out there and I would be amongst the rodeo world folks,” she said.

“Just making it to nationals is a goal and a big deal when you are from Kentucky,” Lawson said. “I would like to be at least in the top five in team roping. It would be cool to place that high again but I really want to win a title and that’s what I am working to do every day.”