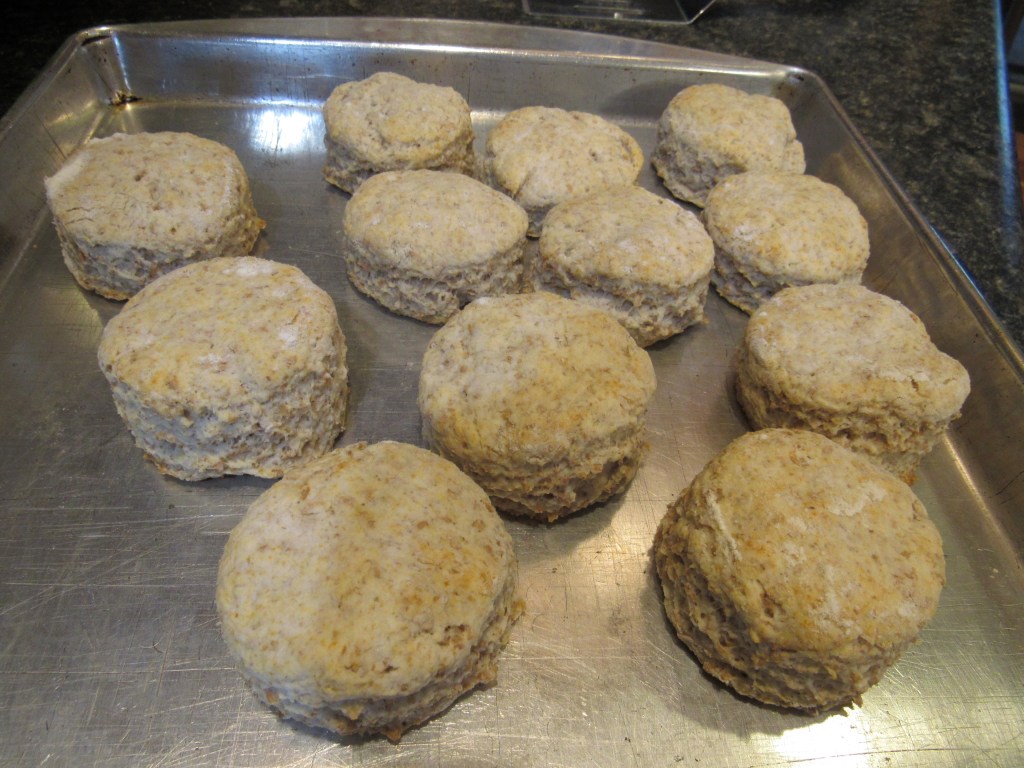 Well, it seems that Brad has developed some type of allergy to white flour. When he eats it, he gets so stopped up he’s miserable. So when we decided to fry some country ham slices for supper, I decided to hit up the internet for a whole wheat biscuit recipe. Because you can’t have country ham and not have biscuits – Right?

I found several variations, but the one I decided to prepare just seemed easy, with only five ingredients, plus it was only going to make eight biscuits. The recipe came from the 100 Days of Real Food website.

I don’t use a lot of whole wheat flour, so when I have it, I store it in the freezer because it keeps longer that way. I didn’t thaw the flour, I just scooped out enough for this recipe and then put the rest back into the freezer.

Once all of the dry ingredients were in my bowl, I cut the butter into small pieces and then used a pastry blender to combine. After about five minutes, I was ready to pour in the milk. I debated on using buttermilk or skim milk and ended up using the buttermilk since other recipes I’d read called for buttermilk and because good biscuits need fat.

After the milk was incorporated, I scooped the dough onto the floured counter top, kneaded it eight times, then patted it out to a little less than 3/4-inch thickness because I don’t like fat biscuits.

The recipe’s author said to use a drinking glass to cut the biscuits out, and you’d end up with eight biscuits. She must have used a huge drinking glass because my two-inch round cookie cutter yielded about 15 biscuits. The biscuits were placed on non-greased cookie sheet pans and went into the oven while I fried the country ham.

Supper was on the table in less than 30 minutes. We sat down at the table, and Brad lifted up a prayer for the food God provided and for His goodness.

I buttered a couple of biscuits and started eating the ham – Yum, it was so good. Country ham is one of my favorites. I put some huckleberry jam (from Brad’s sister in Montana) on one of the biscuits and went to work eating it. I thought it was pretty good. Brad went straight for ham on his biscuits and was very impressed – he really liked the biscuits, so much so that he ate probably more than he intended.

Of course, biscuits were left over because two people didn’t need to eat 15 biscuits in one setting. Brad re-heated some the next morning with his breakfast and said they were just as good as the night before.

I’ve definitely found a winner with this recipe, and the author’s claim that they are The Best Whole Wheat Biscuits is pretty spot on. Brad’s happy I “Nailed it” so he can have biscuits more often and won’t have to worry about his allergies.

• In a medium sized bowl combine the dry ingredients. Mix well with whisk or fork.

• Cut the 1/2 stick butter into little pea sized pieces and then mix the pieces into the flour mixture.

• Using a fork or pastry blender, try to mash the butter pieces as you mix it together with the flour until the mixture resembled coarse crumbs. It’s okay if the outcome just looks like the same pea sized pieces of butter covered with four.

• Then pour in the milk and mix it all together. Knead the dough with your hands 8 to 10 times (for best results do not over-knead the dough) and then turn out onto a floured surface (like a counter or cutting board).

• Pat it out flat with your hands until the dough is a somewhat even 3/4-inch thickness (sprinkle with a little flour if necessary).

• Turn a drinking glass upside down and cut out biscuit rounds.

• Place biscuits on an non-greased baking sheet or in a cast iron skillet and bake at 450 degrees for 10-12 minutes or until golden brown. 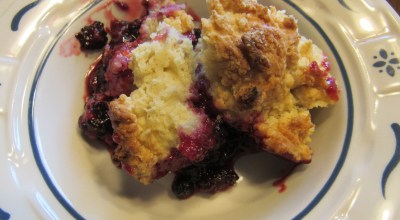