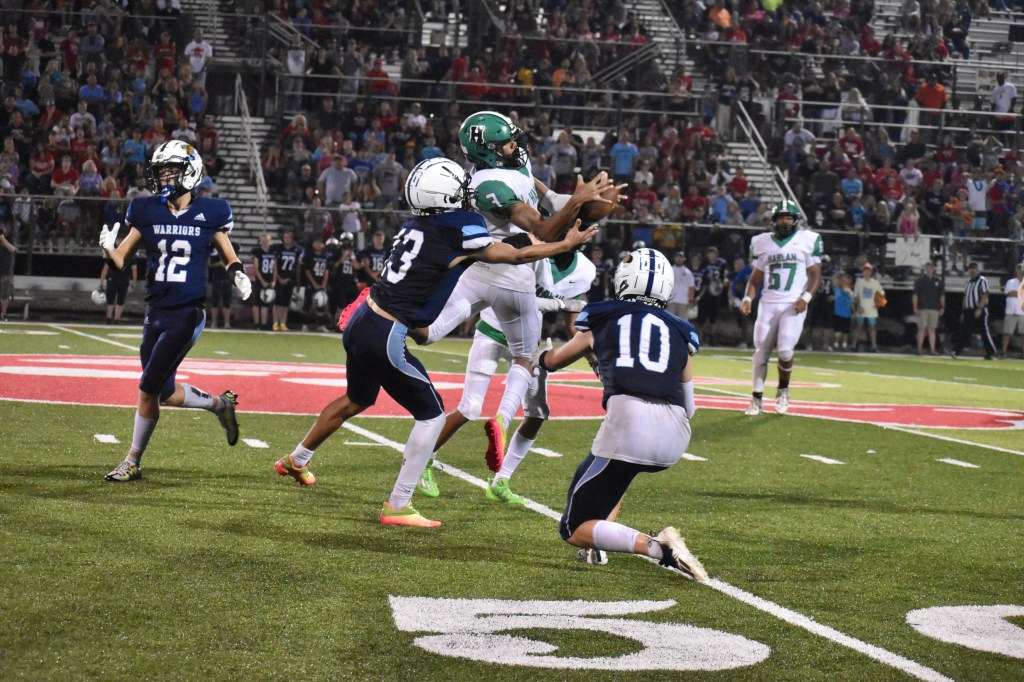 In Friday’s Pike County Bowl against East Ridge, Harlan’s time of possession in the first half was 19:07.

The Green Dragons used the time wisely, and the defense by the green and white was great as Harlan escaped with a 22-16 win.

“I thought our offensive line controlled the line of scrimmage once again,” said Harlan coach Eric Perry. “I really feel those guys will get better and better as the season goes.

“I thought defensively, we were flying around and swarmed to the ball fairly well,” Perry said. “Still gotta focus more on our own responsibilities and not trying to make somebody else’s play in the secondary.”

The Dragons tied the game at 8-all just before halftime as Darius Akal raced 56 yards with 43 seconds remaining. Jayden Ward’s two-point conversion was good.

Harlan’s defense sparkled as the Dragons stopped the Warriors on first-and-goal at the 1-yard line on the last play of the first half.

East Ridge fumbled, and Dale Gommels of the Warriors recovered as the horn sounded.

The Dragons received the ball to start the second half. A six-play, 54-yard drive was capped as Dylan Middleton scored from the 1 with 7:31 left in the third quarter. Ward added the two-point conversion to make it 16-8.

As they did all night, Harlan kept the ball on its next possession for nearly eight minutes.

The Dragons used a 60yard drive in nine plays to score as quarterback Donovan Montanaro scored on a four-yard keeper as Harlan led 22-8.

A drive that covered 64 yards took ten plays as Warrior QB Dylan Burdine went in from the 9 at the 5:33 mark. Burdine’s two-point conversion run pulled his team within six.

East Ridge had one more shot at the end zone.

Burdine completed three passes that covered 39 yards, and a Harlan penalty of 15 yards moved the ball to the Dragon 37.

The East Ridge signal caller was intercepted with 13.6 seconds to play as Harlan’s Will Austin pulled down the ball, giving the Dragons the victory.

The last time Harlan started the season 2-0 was 2016 under John Luttrell. The Dragons completed a 7-4 record that season.

The Green Dragons gained 344 yards on the ground on 51 rushes. Ward, a senior running back, led the team with 189 yards on 22 carries. Akal, a sophomore, finished with 99 yards on eight carries but didn’t play in the second half due to an injury. Middleton added 39 yards on seven rushes.

“I thought Nate played really well in the secondary,” said Perry. “Donovan Montanaro is doing a great job staying poised and running our offense at quarterback,” he added.

“Good to see a couple of freshmen get quality minutes in Gage and Sedrick (Washington),” said Perry. “Jayden and Dylan continue to be warriors.

“Darius was off to having a career night offensively, but had a shoulder injury right before the half.”

East Ridge rushed for 116 yards on 33 carries. Steven Layne, a junior, had 39 yards on five carries. He also led the Warrior defense with 17 tackles. Landon Robinson followed with 14 tackles.

It marked Harlan’s third win in a row over East Ridge in as many years.

The Dragons were without senior linebacker Ryley Mefford for the game.

In Friday’s second game, Belfry rolled to a 42-14 victory over Bourbon County.

Harlan (2-0) will travel to Elizabethton (Tenn.) to battle the 1-1 Unaka Rangers on Friday. Unaka fell to Cloudland 46-28 last Friday.