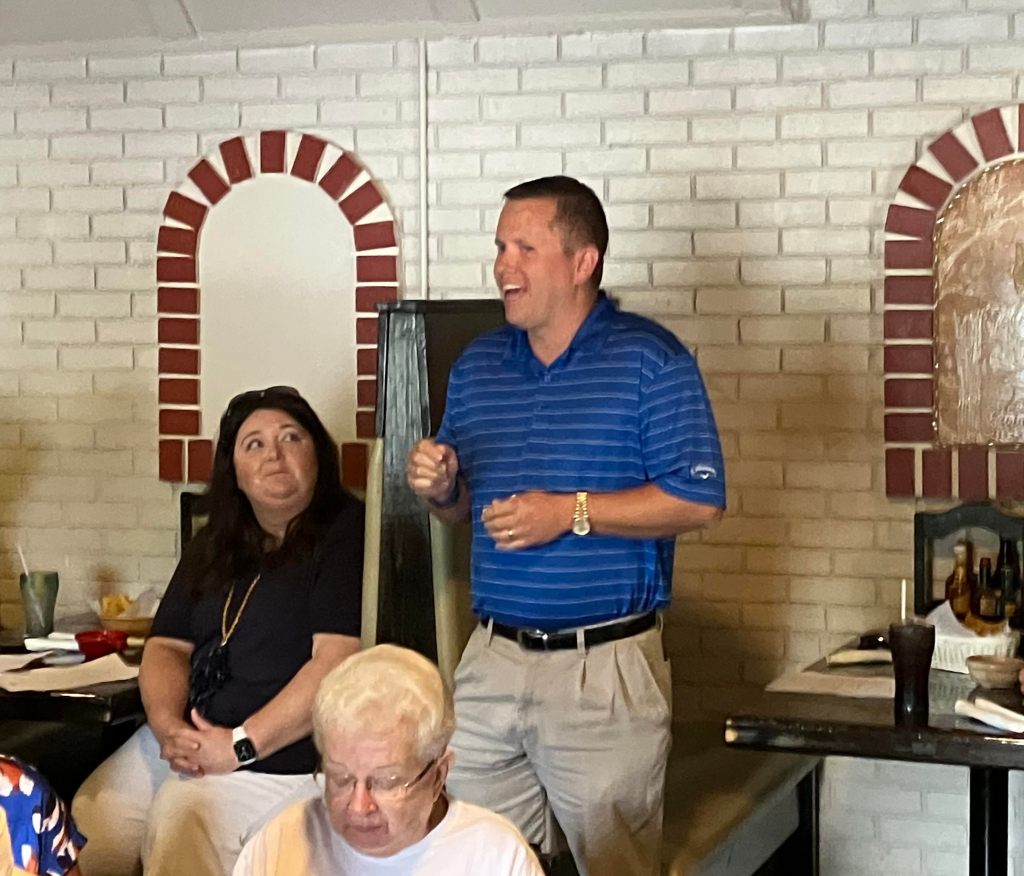 Harlan County Judge-Executive Dan Mosley spoke to the Harlan County Chamber of Commerce during the organization’s regular monthly meeting on Aug. 10, updating the group on how recent flooding has impacted Harlan and the surrounding counties and what actions Harlan County has taken to assist neighboring counties damaged by heavy flooding.

Mosley addressed the meeting shortly after the call to order, covering different aspects of the county’s response to aid neighboring communities.

“It’s good to be with you. I sure appreciate the Chamber of Commerce and all you all do,” Mosley said. “I’d be remiss if I didn’t first of all talk about what is going on in our neighboring counties.”

Mosley told the Chamber he has observed flood damage in Letcher and Knott counties.

“It is really hard to even describe how widespread this damage is,” Mosley said. “We had a flash flood in 2017 … That is the only event that I can remotely compare to what I’ve seen in those neighboring counties.”

Mosley said during the 2017 flash flood event, which impacted a small area of Harlan County, the damage included roadways, railroad tracks, and bridges being washed away and cars being destroyed.

“The damage on that one county road in 2017 is what those entire counties look like today,” Mosley said. “People are literally stranded. They’ve put 2×6’s down across creeks (where bridges have been washed away) just to be able to walk across to get to the other side so they can go get their medicines, food, whatever they need.”

Mosley said repairing the damage will be a slow process.

“I want to brag on the people of Harlan County,” Mosley said. “The people of Harlan County have stepped up in a major way, whether it’s been school groups in the county and city school systems that have done their own relief efforts, whether it has been people I’ve seen personally with pickup trucks full of cleaning supplies…pulling up and unloading, or churches volunteering their time to help people clean out the mud from their homes. I’ve seen so many people from Harlan County in Letcher County in the last week and a half. It’s very inspirational.”

Mosley told the Chamber how the Harlan County government has been assisting the flood-stricken areas.

“I went Thursday evening, which was the evening of the flood … By Thursday evening, there were still main roads that were not passable,” Mosley said. “We got into downtown Whitesburg, and it looked like an absolute war zone. It was evident they were going to need people and equipment immediately.”

“We were able to take those snowplows over there and clear a lot of roads that did not sustain heavy damage,” Mosley said. “There were some places our plows wouldn’t work but required a backhoe or other equipment.”

Mosley said at one point, 12 of Harlan County’s 17 road department employees were working in Letcher County dealing with the flood damage. He noted Harlan County Emergency Management Director David McGill has also been working in the flood-impacted areas since the flooding occurred.

“Animal control has even been involved,” Mosley said. “Harlan County Animal Control has a rescue trailer. That trailer has been committed to Letcher County.”

Mosley explained the trailer uses a generator to provide a heated and cooled environment where people may house their pets while trying to get back on their feet.

Mosley mentioned he had also seen many other Harlan County residents, such as Harlan County Extension Agent Jeremy Williams, who was in Letcher County to assist.

“That spirit of loving your neighbor has really shined through during this situation,” Mosley said.

According to Mosley, housing is one of the most significant current needs for flood victims.

“There is not enough available housing in Letcher County or Knott County presently to be able to satisfy the demand,” Mosley said. “If you have apartment buildings or rental houses that are vacant right now, if you want to email me, we’re going to try to form a database in our office of the available housing in Harlan County. We’re not trying to steal citizens from neighboring counties or anything like that. We’re trying to find people a home where they can get a roof back over their head and start their lives until they can figure out what they need to do.”

Mosley said it is unknown how long it will take for all the victims to get back on their feet.

“I’ve been to many places where there have been disasters, and I’ve never seen anything like this,” Mosley said.