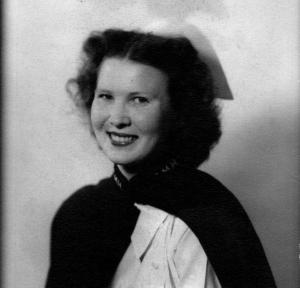 Edna Ruth Anderson, age 96, died in Louisville, KY on June 15, 2022. She was born Edna Ruth Barr on September 19, 1925 in Wetzel County, West Virginia, the first of three children born to Morgan Barr and Lindy Ellen (Potts) Barr. Ruth spent her childhood in small-town West Virginia, and in 1943 graduated from Pine Grove High School, where she played the cornet in the high school band. As soon as she turned 18, she joined the Cadet Nurse Corps to pursue her longstanding ambition to become a nurse. She trained at the Camden Clark Medical Center in Parkersburg, WV and later at St. Elizabeth’s Hospital in Washington, DC. In November 1945, she married William Howard Anderson, also a 1943 graduate of Pine Grove High School and a veteran of the U.S. Navy. They moved to Chicago where he attended medical school at the University of Chicago and Ruth worked as a pediatric nurse. Their first child was born during this time. In 1949, the family moved to Staten Island, NY, where three additional children were born. In 1955, they lived in Cumberland, KY for a year, and in 1956 moved to Harlan, KY, which was their home for the next 7 years. Dr. Anderson worked at Harlan Memorial Hospital and the Anderson children attended Hall Elementary and Hall High School. During this time, one more child was born. In 1963, Dr. Anderson joined the faculty of the University of Louisville College of Medicine and the family relocated to Louisville, KY; their sixth child was born shortly after this move. Throughout her adult life, Ruth was engaged in civic and arts-related activities. She was a PTA president, Girl Scout and Boy Scout leader, docent at the Speed Museum, past president of the Kentucky Association of Volunteer Administrators (KAVA), past president of the U of L Women’s Club, a member of the Association of the Louisville Orchestra, and a volunteer at a Red Cross blood donation site. She also worked part-time as a weight loss counselor and full-time as Director of 2 Volunteers at the Visiting Nurses’ Association. She enjoyed water skiing, tennis, gardening, embroidery, macrame, and large family gatherings. She was a member of the Westport Road Church of Christ in Louisville from 1963 until the end of her life. In connection with her church membership, she volunteered at Spring Mill Bible Camp in Mitchell, IN, established a resource room for Sunday school teachers, worked with Vacation Bible School, and established the Christmas Food Box Ministry.
Ruth Anderson was preceded in death by her husband William H. Anderson, M.D., her mother and father, and by her two siblings Joan Barr and Donald Barr. She is survived by her six children and their spouses: Dolly Ellen (Anderson) Dearner (James Dearner); Timothy Riley Anderson (Sue Mahaffey); Susan Anderson Crull (Elgin Crull); Nancy Eileen Anderson (Dow Marvin); Kathleen Joan Anderson (Johnny Caran); and Jeanne Marie (Anderson) Share (Allen Share). She is also survived by four grandchildren: Ruth Ellen (Hohman) Parrott (Richard Parrott), Sarah Allison (Dearner) Allbright (Christopher Allbright), Christopher Preston Dearner (Elizabeth Silver), and Andrew Nathan Anderson. Additional survivors include four greatgrandchildren: Guy Allbright, Eva Allbright, Anderson Parrott, and Brody Parrott, as well as brother-in-law Jud Anderson, cousin-in-law Alex Wade, and several nieces and nephews. A memorial service was held at 2:00 p.m., June 26 at the Westport Road Church of Christ, 4500 Westport Road; interment was in Middletown Cemetery in Middletown, KY. Memorial contributions may be made to the Building Fund at Westport Road Church of Christ or The Visiting Nurses’ Association.