Update: more on the alligator chase that led to charges for a Harlan County man 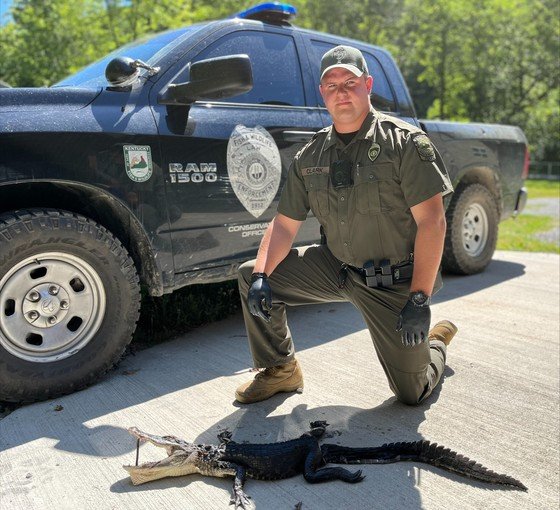 The escaped gator - in the bottom of the photo - was found dead. - Photo courtesy of Kentucky Department of Fish and Wildlife.

A Harlan County man was cited for multiple misdemeanor charges after allegedly bringing an alligator into Kentucky and not reporting the animal’s escape.

During a telephone interview, Clark explained he received a call from Kentucky State Police Post 10 in Harlan.

“A dispatcher called me from Post 10 and said, ‘I’ve got an interesting case for you,’” Clark said. “We get tons of calls like this, most of them with little to no validity. We drove over there and met with an individual who showed us pictures on his phone, and we knew there was something to this.”

According to a news release, Clark and fellow fish and wildlife official Aaron Smith acted on a tip received on June 19. The pair began a search that evening in the Greasy Creek area near KY 2008. The alligator was located the next day. Once the two found the interloping reptile, they left the area to retrieve equipment to aid in capturing the 4.5-foot-long alligator. Upon their return, the pair discovered blood on a rock next to the creek and a trail of blood leading to a nearby road.

“We were hoping we could remove it safely without the alligator being harmed,” Clark said.

The release states Clark then began an investigation which led to the residence of a relative of Cornett. When he arrived at the home, blood was found in the bed of a pickup truck. Clark spoke with Cameron’s relative, who advised Cornett had obtained the alligator in Florida and transported the animal to Kentucky, keeping the alligator in an enclosure in his front yard. The animal had escaped the enclosure approximately three weeks before Clark spoke to the relative. Eventually, a video of the alligator appeared on social media.

The release further states the relative informed Clark that Cornett had become concerned about the attention the animal was receiving and instructed that the animal be killed. The relative and another person killed the alligator.

“They transported it over to Sandhill in Cumberland,” Clark said. “We were able to seize the carcass there. It was a four-foot six-inch alligator carcass.”

Clark explained he spoke with Cornett on the phone.

“He was very cooperative,” Clark said. “He met with me and gave me a written statement saying he obtained the alligator in Citrus County, Florida. He caught it and transported it here in his car.”

Clark said Cameron said he would keep the alligator as a pet.

“Apparently, the alligator had been missing for at least three weeks,” Clark said. “He had been looking for it and couldn’t find it.”

Clark explained incidents such as this are very rare in southeast Kentucky.

“I’ve been on this job for five years, and this is probably the fourth call I’ve got like this,” Clark said. “This is the only one where we’ve actually been able to find the alligator and know it was removed.”

Kentucky has strict laws against bringing exotic reptiles like alligators to the Bluegrass state due to the damage they can do to the commonwealth’s ecosystem, such as the potential transmission of diseases and introduction of species that can cause harm to the native wildlife, people, pets and livestock.

“Alligators don’t make good pets. Even a smaller one can injure a person,” Clark added. “When an alligator grows beyond a person’s capacity to care for it, oftentimes it gets released into the wild, and then it becomes a potential danger to others. Besides, it’s unlikely to survive through the winter.”