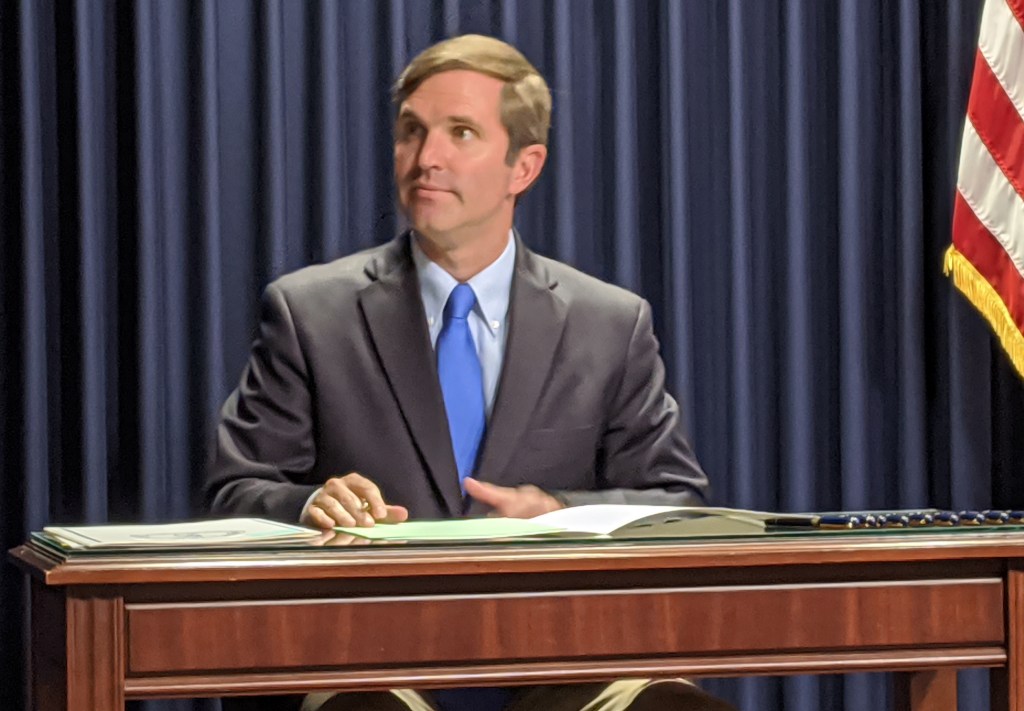 Kentucky lawmakers will return to Frankfort Wednesday to consider overriding Gov. Andy Beshear’s vetoes of several bills, including two related to health. They would put new limits on abortion and set new rules for public assistance programs, including Medicaid.

The General Assembly will also consider passing other bills, but because it is required to adjourn by Friday, the Democratic governor could veto them without fear of being overridden by the Republican legislature.

The wide-ranging anti-abortion measure, House Bill 3, would ban mailing of medications that have become the means for most abortions in Kentucky, strengthen parental-consent rules and ban abortion after the 15th week of pregnancy, mimicking a Mississippi law that is awaiting a decision from the U.S. Supreme Court.

In his veto message, Beshear noted that the bill makes no exemptions for pregnancies caused by rape or incest, and described how the proposed parental-consent rules would require both parents to be notified if a girl under 18 wants an abortion. He said that could create a situation where a young girl who has been raped and impregnated by her father would have to notify him of her intent to get an abortion or go through an onerous process of getting a court order to allow it.

“Rape and incest are violent crimes,” Beshear said. “Victims of these crimes should have options, not be further scarred through a process that exposes them to more harm from their rapists or that treats them like offenders themselves.”

Further, he said the bill is likely unconstitutional and that the new reporting and oversight systems would create an “unfunded mandate” for the state Cabinet for Health and Family Services.

Beshear said he vetoed the public-assistance reform bill, HB 7, “because it will hurt Kentuckians by threatening access to health care and making it harder for those in need to access crucial benefits.” He said the administrative burdens could cause people to lose benefits, said the bill could violate federal Medicaid requirements, and said it provides no appropriations for the health cabinet to implement the bill’s requirements. He pointed out that when Kentuckians lose health and food benefits, that not only affects them, but physicians, hospitals and the economy.

The bill’s sponsor, Rep. David Meade, R-Stanford, has said the added rules in Medicaid and food-benefit programs are needed to reduce fraud and encourage able-bodied adults without dependents to get off Medicaid and other public-assistance programs and back into the workplace.

It is expected that both bills, priorities for Republicans, will be repassed over Beshear’s vetoes, just as they overrode his veto of a resolution ending the Covid-19 state of emergency about a month early, costing 544,000 Kentuckians an extra $100 a month in pandemic-related food benefits.

On March 30, a spokesperson for the U.S. Department of Agriculture, which houses the Supplemental Nutrition Assistance Program, formerly called food stamps, told Kentucky Health News that the additional month of Covid-19 benefits had been approved for April.

One of the health bills to watch is HB 174, sponsored by Rep. McKenzie Cantrell, D-Louisville, that would extend Medicaid coverage to new mothers up to 12 months after giving birth. This bill sailed unanimously out of the House in February, passed out of its Senate committee unanimously on March 23 and was placed on the consent calendar, used to pass bills without debate.

Since then, five floor amendments have been filed, including one by Sen. Adrienne Southworth, R-Lawrenceburg, that includes provisions of HB 51, sponsored by Rep. Lynn Bechler, R-Marion, that would allow a parent or guardian to opt out of any masking, testing or vaccination requirements imposed in response to the coronavirus. HB 51 passed the House 56-35 on March 8, but has lingered in the Senate Health and Welfare committee without a hearing.

Another bill to watch is HB 604, sponsored by Rep. Kim Moser, R-Taylor Mill. It would create the Kentucky Center for Cannabis Research at the University of Kentucky. It is supported by Senate President Robert Stivers, who has said the idea of medical marijuana needs more study to become law.