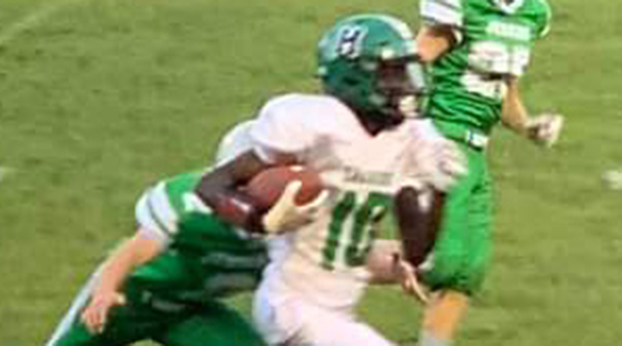 The Green Dragons scored on all four possessions, as the game was called with eight minutes left in the third quarter. Harlan extended the Cavaliers’ losing streak to 34, winning 30-0.

Coaches and officials met early in the third period when light issues occurred for the second time in the game.

Harlan was whistled for 12 penalties for 120 yards.

“We played well defensively, but still got to clean up all the mental mistakes that are really costing us,” said Harlan coach Eric Perry.

Harlan had 193 yards passing and 84 yards on the ground.

Sophomore Donovan Montanaro started at quarterback for the Green Dragons. Montanaro completed four of five passes for 113 yards. Cade Middleton got into the game in the second quarter and completed three of four passes for 80 yards.

“Donovan had a really nice game in his first (ever) start at quarterback,” said Perry. “He was very poised in the pocket.”

Harlan opened the scoring at the 4:26 mark as Montanaro went in from the 15-yard line. He also added the two-point conversion as the Dragons led 8-0.

With two minutes remaining in the opening period, Jenkins faced fourth down-and-16. Harlan scored a safety as Robert Sanford and Jayden Ward tacked a Cavalier player in the end zone.

Harlan’s Will Austin took the kickoff and raced 36 yards on the return to the Jenkins 24. On the next play, Montanaro scored with 38 seconds left in the first quarter. The run failed, but the Dragons led 16-0.

A 10-play, 87-yard drive was capped as Middleton connected with Evan Browning for a 30-yard TD pass. The two-point run failed as Harlan led 22-0 with 28 seconds to play in the first half.

Montanaro took the second-half kickoff and raced 42 yards to set up the Dragons’ final score. A 24-yard pass from Montanaro to Dylan Middleton pushed the ball to the 17. Two plays later, Montanaro scored from the 12. His two-point conversion run closed the scoring.

Jenkins marched the ball down to the Dragon 5-yard-line when a set of lights turned off, again.

The Green Dragons are hoping to get senior lineman Jonathan Lewis back soon.

“It will be our first home game, and should bring a little excitement. Hopefully, the kids will be excited about playing in front of the home folks.

“Should be a really big test for us,” Perry added.

Jenkins (0-1) will travel to Betsy Layne this week.

Levis looks to put up big numbers, prep for…