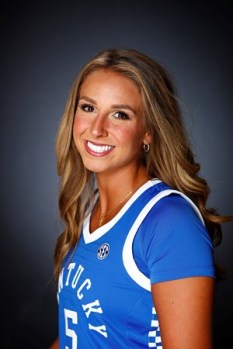 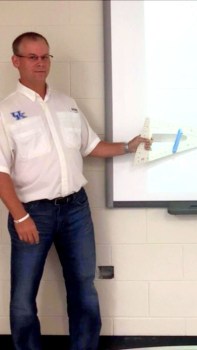 University of Kentucky student-athlete Blair Green recently selected Greg Longworth, a math teacher at Harlan County High School, as the recipient of a $3,500 SEC grant as a way to give back for the support she found in his class.

In partnership with the College Football Playoff Foundation, the SEC chose student-athletes from colleges and universities across the country to select and recognize a teacher that had greatly impacted their life, whether they were in elementary, middle or high school.

Through CFP Foundation’s Extra Yard for Teachers platform, 14 different teachers were chosen to receive the $3,500 grant to use towards the purchase of classroom supplies and materials on donorschoose.org.

Green said the grant is normally around $10,000, but because of the strain COVID-19 has placed on the economy, $3,500 was a baseline for each teacher selected.

“I know when I had Mr. Longworth in class he was always really hard on us. At first, it’s something you might not appreciate, but later on, I really appreciated it going into college,” Green said. “A good work ethic is something you have to have there, and Mr. Longworth always held us to high standards. It really influenced me a lot now that I look back at it.”

Green said she felt Longworth treated everyone the same, another thing she found important to the success of HCHS’ Class of 2018.

“He was always looking out for our best interests. He really did a great job at preparing us for the next level” she said.

Green said her favorite memory from Longworth’s class is of going roughly a week without any calculators to use because two of the calculators went missing from his room. It was later discovered that a student had accidentally packed one in his bag before a trip to Louisville.

“Just keep working,” she said to anyone currently taking a class under Longworth. “It’s a tough class, but you’re going to get through it. He will push you, but he’s also going to care for you. He’s very willing to help.”

Longworth said he was shocked when he got the call about the grant, first thinking it could have been a scam or prank call.

“I was so floored,” he said. “When Misty Brown called me, I about didn’t answer the phone.”

Longworth said he still doesn’t know how to truly react, but he is “very honored” to have Green think of him for such a grant.

“The group she was part of was one of those groups that only comes around once in a while, honestly, so I really remember them well,” Longworth said. “Their ACT average was over 25 in math.”

Longworth said he remembers Green took calculus in high school, and he was proud of her for tackling it.

“The first exam she got, she came down the hallway and showed me the A she had got on it,” he said. “She is the epitome of what I think is a true student-athlete.”

Although he isn’t sure what the grant money will be used for, Longworth said he plans to make sure it is beneficial to his students.