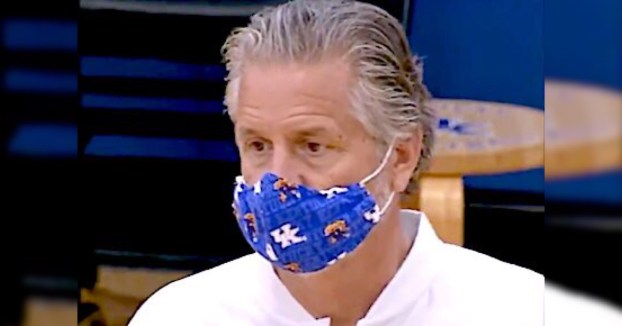 Calipari joined his team for the first time since the COVID-19 pandemic began to focus primarily on the little things on the court.

“(We) went a little old school with some of the things we did,” he said. “Getting on that court and teaching is why we do what we do.”

For more than three months, Calipari spent most of his time talking with other coaches, players and influential personalities with a weekly “Coffee with Cal” series that ended a couple of weeks ago. He also helped establish a foundation — The McLendon Minority Leadership Initiative — to help college minority students amid the ongoing unrest throughout the nation.

Returning to the court has given Calipari a “little extra bounce in my step … because I’ve had the chance to work with our guys.’

“It hasn’t been much — just individuals — but getting to see their faces and talk a little basketball has me smiling,” he said. “We’ve got a determined, dedicated, and hard-working group. We’ve got a long ways to go obviously, but I like this group.”

Calipari likes the mixture of “talent and some veterans.”

“Keion Brooks is way better and Davion Mintz and Oliver Sarr have been great,” he said.

Calipari said he is hopeful Sarr will be eligible to compete this season after transferring from Wake Forest.

“We’re waiting to hear, we feel confident, but you never know until you know, you hear it’s good to go,” the Kentucky coach said. “He’s got a great case. But, you know, we’ll wait to hear.”

Calipari also was glad to see many of his former on NBA rosters. The league will reset the season on July 30 and 17 former Kentucky players are part of 22 teams playing in Walt Disney World in Orlando, Florida.

“(I’m) looking forward to seeing our guys compete again,” he said. “I know they’re itching to go. (The) guys were having some big seasons before the break.”

The NBA playoffs will begin Aug. 17 in the traditional 16-team playoff field – the exception being that all games will be played in Orlando. Here is a list of former UK players who will be competing:

VAUGHT’S VIEWS: Will fans be allowed to attend games if there is high school football?

By Larry Vaught Vaught’s Views The Kentucky High School Athletic Association will have to make a decision soon on when... read more