VAUGHT’S VIEWS: Will fans be allowed to attend games if there is high school football? 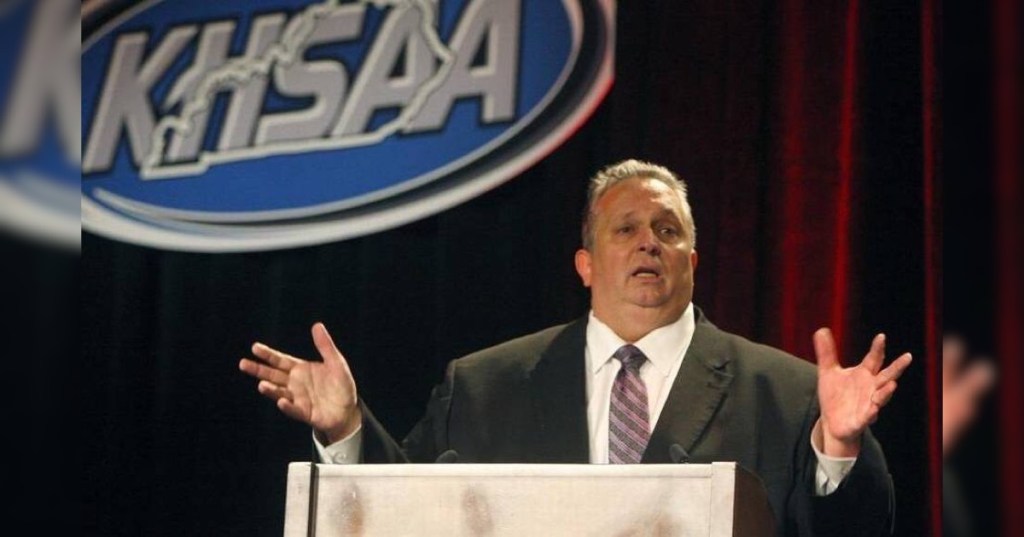 KHSAA commissioner Julian Tackett is planning for limited fans to be able to attend high school fall sports if they are played but says all we need to wear masks. (Photo by Gary Moyers)

The Kentucky High School Athletic Association will have to make a decision soon on when or if fall sports will be played. But even if games are played, will there be fans allowed, especially at football games?

“We are not going to start with the premise of no fans,” said KHSAA commissioner Julian Tackett. “We think there is a (attendance) cap that can be managed. We also know there are some schools that have very large stadiums. You might be able to take it down to 30 percent (of full capacity).”

Tackett says if high schools can play football and generate money for the athletics department, sacrifices are going to have to be made.

“There is not an ice cub’s chance on a hot road at having full attendance at football games. I just don’t think there’s any chance of that,” Tackett said. “But when you talk about attendance, you also have to talk about how you manage the game. You have got to incorporate something about concessions even if it is just to go by the current restaurant guidance.

“We don’t anticipate at this point in time a decision coming out that there will be no fans at games unless that comes from someone other than us.”

That could happen if a local health department mandated no fans at games in a county or city.

Tackett said schools could have decisions to make also if there was a confrontation with a fan or fans who are denied access to games.

“Fans will be there in masks. Plan on that now,” Tackett said. “If you don’t wear a mask, you will get it shut down for everybody. That could be a tough thing for some schools.”

Tackett understands the importance of high school sports for athletes and communities. He knows suggestions have been made to switch seasons for some sports, something he says is easier said than done.

“Which programs do you sacrifice (and not let play)? We have to try to go this fall and then see what adaptations we have to make,” Tackett said.

The commissioner said he was most worried about fall volleyball because he’s not been able to get answer about air flow issues in closed spaces. He’s also been “irritated” by social media phots of football players working out not wearing shirts.

“If you think youth can transmit the virus, why let them out there without shirts? We have to be smarter than that,” Tackett said.

Tackett said there will not be an “all or nothing” plan for fall sports as the KHSAA understands it must remain flexible. He feels good about the start and finish of golf season provided there are no big awards ceremonies or gatherings. He says suggestions have already come his way about no doubles play during tennis season in the spring or making some changes for track.

Out of state competitions are another area that will be addressed by the KHSAA.

“A lot don’t see that as a big issues but we have 42 counties that touch another state,” Tackett said. “So for a lot of schools, that’s a big issue we have to address.”

Tackett also stressed that the KHSAA will not automatically make the same decisions about fall sports that the Southeastern Conference or Atlantic Coast Conference do.

“We will be informed by what colleges do but we will not be controlled by what they do because our situations are different. The SEC and ACC have teams in South Carolina, Florida, Louisiana and other states. They have got hot spots, crowds and travel we don’t have. Our bubble is not anything like their bubble.”