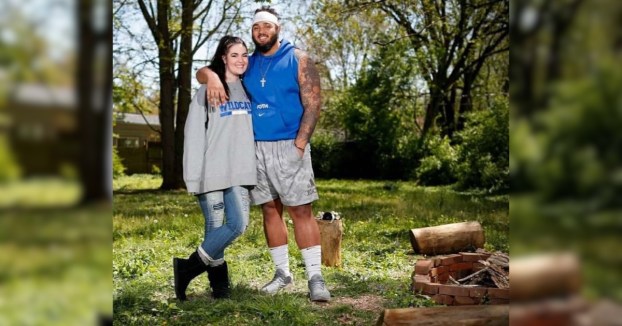 VAUGHT’S VIEWS: Kinnard takes pride in his play, knows he can improve

No one grows up wanting to be an offensive lineman.

Kentucky junior Darian Kinnard is confident any offensive lineman would agree with him because the more glamorous positions are what every youngster envisions he will be playing.

“But once you accept you are going to be a lineman, you take more pride in being a lineman because there are not a lot of people that can do it and be as big as I am and move the way I do,” said the 6-5, 345-pound tackle.

“I take a lot of pride in doing my job right. When you ball  down between the lines, you go to work and make sure your team is winning and getting yards or you are pancaking a defensive lineman.”

Kinnard did all that and more when he helped UK go 8-5 with a rushing attack that was almost unstoppable at the end of the season because of the offensive line. He had 32 knockdown (pancake) blocks while starting all 13 games and committed just one penalty in 706 snaps.

Even though Kentucky didn’t throw the ball often the final eight games, he also gave up just one quarterback sack and says that came on a mistake against Florida in game three.“I didn’t see the call from the sideline. I asked the guard what it was and didn’t understand what he meant and I gave up a free sack,” Kinnard said. “My one penalty was against Florida, too, when I grabbed a guy just enough to get the call.

“A good lineman is one who is not noticed. If I am doing everything right, then you just basically say that guy is good and doing his job. That is what being a lineman is all about.”

Kinnard is going noticed a lot lately but for the right reasons. He was ranked by SEC Network analyst Cole Cubelic as the SEC’s second best returning offensive line. He was named to the all-SEC first team in Phil Steele’s College Football Preview along with a preseason All-American. He’s on the potential 2021 NFL draft list of many football analysts.

None of that is going to change his focus.

“There are plenty of small things that need work. I can get away with some of them now but at next level you will not get away with it,” Kinnard said. “I am not looking just to stay the same.

“If I want to go in the first round, I have to keep improving. If I want to go to the Hall of Fame, I want to improve. If I set a goal I want to get it done. When I was a little kid I had a dream of getting college paid for. Now I want a lot more.

“No matter where I went, I was expecting to do great and then leave early (for the NFL). This is a great opportunity I got from Kentucky,” Kinnard, a Knoxville native, said. “I love my family here. I stayed committed to Kentucky. I just had to sit back and re-evaluate when so many big schools started coming after me. I stuck with Kentucky and that’s the best life decision I could have ever made.

“I am not a cocky person, but I believe in myself. I had full faith I could come here and overcome anything thrown at me. I had to hit the ground running and go to work.”

He played in nine games his first year but started two of the final three, including Louisville where his blocks helped spring touchdown runs by Benny Snell (24 yards), A.J. Rose (75 yards) and Kavosiey Smoke (37 yards).

“At times I wish I could have started more games as a freshman but people do not want to put faith in a true freshman,” Kinnard said. “I get you trust the older guy more. It is a coach’s job if you have a bad game and put him on the chopping block. I understood that.

“I got my name out there and next year (2019) was my time and I took over and did what I knew I could do. I kept my nose to the grindstone. That’s how I am because I know I can always be better.”

During the quarantine time when he was not allowed on campus to work out he improvised. He lives in a house with his mother, a nurse, and found a way to use “big logs” in the back of the yard for his workouts.

“I would throw them around to get my muscles moving. I took a week off when we had finals but I did it every other day the whole summer until we got back,” Kinnard said. “Two days I would go to the park and jog. I just kept myself busy. Nothing can prepare you like a weight room but I tried to stay as ready as I could.”

By Larry Vaught Vaught’s Views Long before he ever thought about a football scholarship offer from the University of Kentucky,... read more