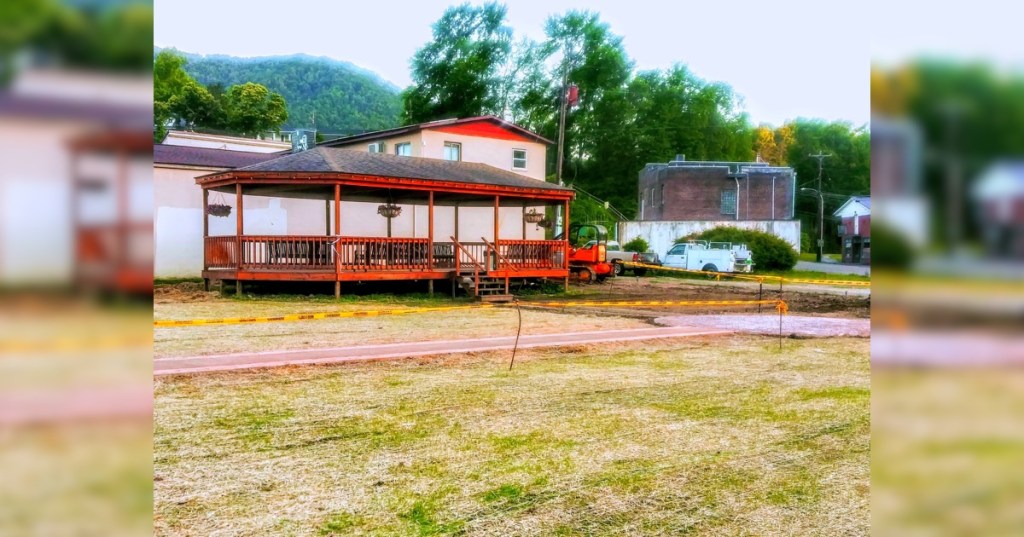 New light poles, benches and more are just the beginning of a new town square in Cumberland, where future events will take place for years to come. (Emily Sargent | Harlan Enterprise)

Cumberland’s getting a face lift this summer, making the city an ideal venue for concerts and other events.

Utilizing a grant from the Robert E. Frazier Foundation, the town square on Main Street will have all new light poles, benches, trash cans and picnic tables, including a ADA (Americans With Disabilities Act) table.

District 3 Magistrate Paul Browning III said the Cumberland Tourism project will also include two sidewalks, intersecting in an “X” pattern, that would allow easier wheelchair access to the gazebo.

He said the space has been gaining popularity in Cumberland, with people gathering there to spend time together and enjoy events throughout the year.

“Cumberland Tourism has been doing a great job with utilizing that space in the past and finding more and more uses for it,” he said.

“Of course, they do the Christmas tree lighting there, something for the Fourth of July. They try to plan some events around holidays and then fill in the blanks between them by having bands and local vendors setting up there,” Browning said, adding that attendance has always been positive.

He said the location along Main Street combined with the amount of parking has helped Cumberland and its people enjoy their city more.

“I think the new town square will definitely benefit the community and allows for an improved avenue for more venues and activities,” he said.

Browning said he believes the location used to serve as a bus depot with a cafe and motel rooms also on the property. Years later, the building was torn down to open the space on Main Street to help in the city’s revitalization.

“This is going to be a nice focal point for the town,” he said. “That’s an area that’s never really been an eyesore, but it just goes back to what I’ve been saying — we have some beautiful areas here that just need some polishing up. This is certainly one of those cases of polishing it up and making the space more useful for its people. For that, I’m grateful.”

Although the new town square will be named at a later date, some sentimentality is already tied to the area through the grant itself.

The Robert E. Frazier Foundation awards numerous grants to domestic 501(c)(3) organizations throughout the cities of Cumberland, Benham and Lynch, which benefit tri-city locals and their future generations.

Robert E. Frazier, for whom the foundation is named, was the 20th resident of Cumberland, whose parents, Enoch and Lillie Frazier, opened Cumberland’s first general store.

As a noted exemplary community leader by locals, Frazier dedicated his life to serving his hometown, ultimately establishing the foundation to help support improvements in the tri-city area.