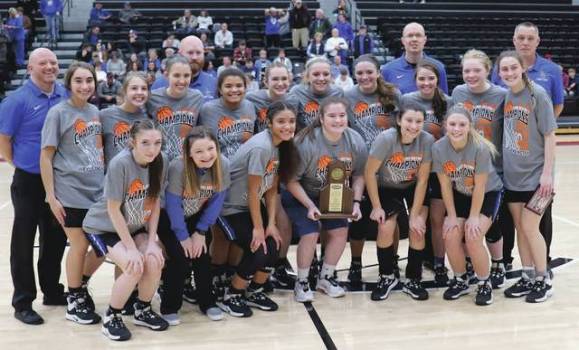 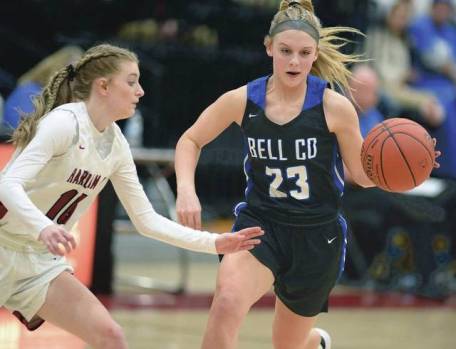 There was no doubt who Bell County coach David Teague wanted to have the ball with the 52nd District Tournament championship on the line Thursday at Harlan County High School.

The Bell County senior guard dribbled away the final 75 seconds with the game tied at 51 before heading to the basket with 10 seconds left. Harris drew a foul with 5.1 seconds left, then missed the first shot and hit the second to send the Lady Cats to their first district title since 2015 when Mrs. Basketball Maci Morris led the Lady Cats. Harris finished with 35 points to earn tournament most valuable player honors.

“I didn’t know how the last little bit would play out, and I don’t usually do that,” said Teague on his decision to hold the ball for one shot. “I wanted the ball in her hands. I’d rather have her at the line than anybody around. She played a heck of a ballgame.”

“I thought we played good defense for the most part. Abby got in the lane too much, but she’s a good player and that’s what good players do,” Harlan County coach Debbie Green said. “We just had too many turnovers. That really killed us. A lot of our kids haven’t been in this situation. We just needed to be smarter with the basketball.”

Senior guard Hannah Wood scored 15 points to lead the 16-11 Lady Bears. Wood hit five 3-pointers, including three in the third quarter when HCHS turned a four-point deficit into a 38-31 lead going into the fourth quarter.

“They hit some shots, including some from deep. We got a little stalled on offense,” Teague said. “We thought it would be a game of runs because I knew both teams would fight and battle. I’m glad we made some plays when we needed to.”

Harlan County’s lead grew to nine, at 44-35, on Wood’s final 3-pointer with 6:40 left. Bell turned the game from there with its press as the Lady Bears turned the ball over nine times in the period, including five straight possessions at one point to spark a 14-0 Bell run. Bell led by five with 1:36 when Harlan County made a comeback of its own as Jacey Lewis hit a 3-pointer and Morgan Blakley connected on two free throws to tie the game with 1:15 left. Harris dribbled out all but the final five seconds before hitting the game-winning free throw. Wood rushed a 3-pointer from halfcourt with two seconds left that was off the mark.

“Hannah made some huge shots to get us the lead,” Green said. “I don’t have any timeouts at the end, or I would have taken one. I thought it was a great game and great atmosphere. We just need a couple of big rebounds at the end.”

“That was big for us, I was so proud of our guards and now they put pressure on the ball,” Teague said. “I thought Mataya Ausmus and Nadene Johnson did a great job on defense. We started rotating a little better. We knew we had to make some plays to get back in the game.”

Harlan County had won the last three district titles, but the Lady Cats dominated the district the season with eight wins in eight games.

“It always feels good to win a district championship, and that was one of our goals when we started the season,” Teague said. “I thought we had the team this year capable of doing that. I’m so proud of these girls. They battled all year long in practice and games. To finish it off with a district championship is a great accomplishment for them.”

Both teams advance to the 13th Region Tournament opening Monday at The Arena in Corbin.