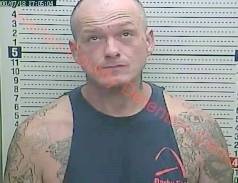 A Harlan man was recently arrested after allegedly trying to fight with police officers when they attempted to calm an argument between him, his brother and his brother’s girlfriend.

According to the citation, officers were dispatched to May Street where Holbrook was said to be yelling and throwing clothes after getting into an argument with his brother’s girlfriend. Holbrook’s brother also advised he had made comments about killing himself.

Alford said he asked Holbrook to step outside and speak with him about the situation as a way to calm him down, but Holbrook refused and began putting his hands in his pockets and making an aggressive stance. Alford added he told Holbrook to remove his hands and he refused, causing the officer to grab his hands when Holbrook allegedly jerked away and shoved him.

A taser was deployed and Holbrook began cursing at police and telling them to “shoot him” before attempting to fight. Alford then took Holbrook to the ground and held his hands away from his body until Noe placed handcuffs on him, according to Alford’s citation.

Holbrook was also said to have a large, metal nail-type dagger with a cord handle in his pocket, appearing to be homemade.

Holbrook was charged with menacing, third-degree assault (police/ probation officer) and resisting arrest. He was lodged in the Harlan County Detention Center on a $15,000 full-cash bond, 10 percent with bail credit.

• David Smith, 60, of Baxter, was arrested by Harlan County Sheriff’s Office deputies on Feb. 16. He was charged as a persistent felony offender I with first-degree assault, no operator’s license, operating on revoked/suspended license (DUI) and operation of motor vehicle while under the influence. He was lodged in the Harlan County Detention Center for transport;

• Jennifer Harris, 48, of Cumberland, was arrested by Cumberland Police Department officers on Feb. 19. She was charged with first-degree wanton endangerment and was lodged in the Harlan County Detention Center on a $500 full-cash bond.

The above information was compiled from the Harlan County Detention Center website. For more information, visit www.harlandc.com and click “Current Inmates.”