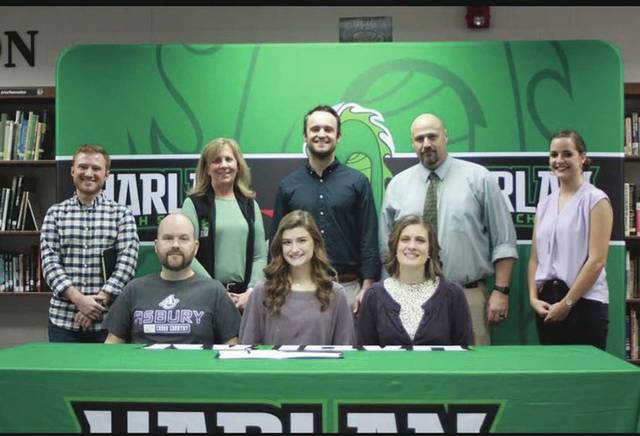 Many students choose their future college because they say it feels like home. For Harlan High School senior Lucy Bryson, Asbury University is home.

Bryson, a cross country and track standout at Harlan, recently signed with Asbury to continue her cross country career and carry on a family tradition that goes back to the spring of 1925 when Lucy’s paternal grandfather, Patrick Henry Wiley, graduated from Asbury College. Her maternal grandfather, David Brooks Nagel, and grandmother Janice Schroen Nagel, were members of the 1964 Viking class and 1965 Conquerors class, respectively. Her father, Stephen Churchwell Bryson, was a member of the 1993 Servants class and her mother, Tara Nagel Bryson, was a member of the 1995 Guardian class. Lucy will be the 43rd Asburian in her family and the first of her generation, but she is hoping her cousin, Rex Nagel, will join her in the fall.

“The reason I chose Asbury was because it’s a school that is very close to my family,” Bryson said. “ I’ve had many of my family members speak so highly about their time there, and I hope to share those memories with my future children. I also chose Asbury in hopes to grow my faith and become closer with God throughout college. I’m very excited to spend these next four years there.”

“Lucy has always been someone who sets goals for herself. As both her coach and her mother, I have expected her to work to reach the goals she has defined,” said former Harlan coach Tara Bryson. “Her high school career highlights, for me, were getting to be with her after the races where she accomplished her goals of setting school records for cross country and the 800-meter race.”

“Lucy has always committed herself to her running and her team,” said Harlan coach Connor Sakati. “Whether she is practicing before school on a frigid November morning, or leading her younger teammates and helping them to develop as runners, she has a gift and passion that I am glad to see her continue in college.”