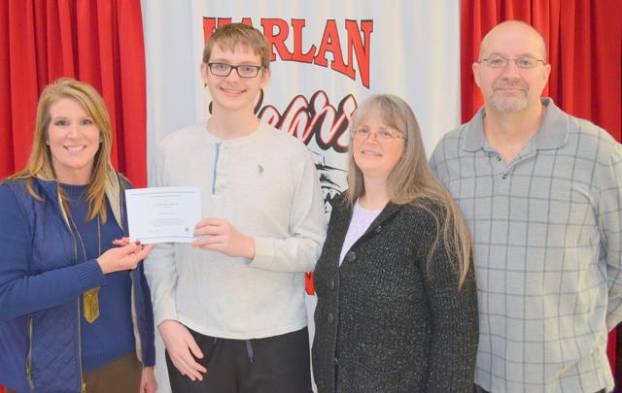 Johnson, a 16-year-old senior, was among 16,000 semifinalists named out of a 1.5 million pool of seniors in September. He is now being considered for the 2020 scholarships.

“I am truly honored to be selected as a National Merit Finalist,” said Johnson. “I didn’t get here alone. I had parents, teachers and administrators helping me get where I am today. I am blessed that I can say that. I hope that this honor will help propel me to success through college and beyond.”

Harlan County High School Principal Kathy Minor was notified of Johnson’s advancement on Tuesday. She presented him with a certificate from the scholarship corporation to recognize his outstanding accomplishment.

Minor commended Johnson for his success, saying “It truly is an elite honor. He is a Finalist after having begun in a pool of 1.5 million high school juniors from 21,000 high schools across the nation. As a Semifinalist, Emerson was among less than one percent of all high school seniors in the country, including the highest scoring entrants in each state.”

Finalists are in the running for 7,600 scholarships worth more than $31 million.

Semifinalists had to fulfill numerous requirements to advance to finalist.

NMSC, a non-profit organization operating without government assistance, was established in 1955 specifically to conduct the annual National Merit© Scholarship Program.

Scholarships are underwritten by NMSC with its own funds, some 400 business organizations, and higher education institutions sharing the goals of NMSC to honor the nation’s scholastic champions and encouraging the pursuit of academic excellence.

Johnson is a well-rounded student at HCHS. Earning an impressive 35 overall on the ACT and a perfect score in two areas of assessment, he participates on the academic team, tennis team, National Honor Society, BETA Club, and in the GEAR Up program. He is in Project Lead the Way, an engineering preparatory program at HCHS. He has received numerous academic accolades for his outstanding work.

To advance to a Finalist, Johnson and HCHS representatives submitted a detailed scholarship application. This provides information about the academic record, participation in school and community activities, demonstrated leadership abilities, employment, and honors and awards received.

He reached Semifinalist status meeting requirements of an outstanding academic record throughout high school, endorsed and recommended by a high school official, wrote an essay and earned SAT and ACT scores that confirmed his earlier performance on the qualifying test.

He is the son of Brent and Paula Laun Johnson.