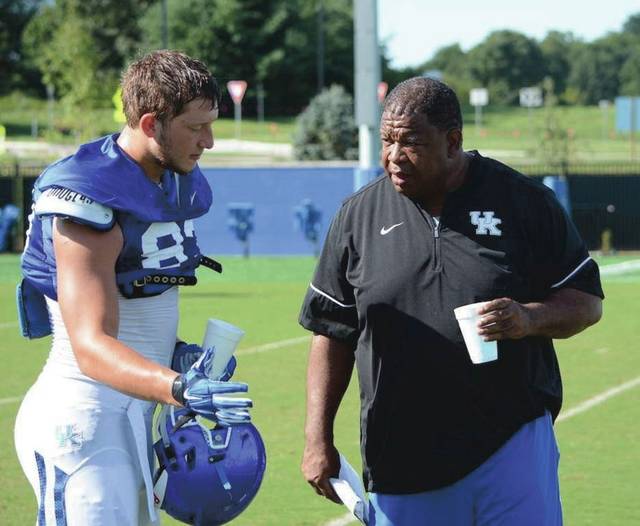 Kentucky recruiting coordinator and associate head coach Vince Marrow announced on Twitter Friday night that he was staying with the Wildcats.

The University of Kentucky associate head football coach and recruiting coordinator announced on Twitter Friday night that he was staying with the Wildcats instead of taking the head coaching job at Youngstown State.

“Hey BBN, love and appreciate you guys more than you know,” he tweeted. “It’s been a pleasure workin for UK fans across the country. That said, my desire to stay in the Commonwealth is great than my desire to return to Youngstown and be head coach. Thanks for the respect (and) consideration.”

Marrow had been considered a frontrunner for the Youngstown State post after Bo Pelini stepped down to return to LSU and become the school’s defensive coordinator.

Marrow has been responsible for Kentucky’s success on the recruiting trail and has helped the Wildcats sign players such as former defensive end Josh Allen and Lynn Bowden. Bowden was recently named Lexington Herald Leader Sports Figure of the Year after leading the Wildcats to an 8-5 record and a win over Virginia Tech in the Belk Bowl last month.

As for the team’s incoming freshman class, Marrow offered his excitement during the early signing period last month.

“It’s one of our best classes we have signed since we have been here,” he said. “Coach (Mark) Stoops is very excited and our whole staff is excited.”