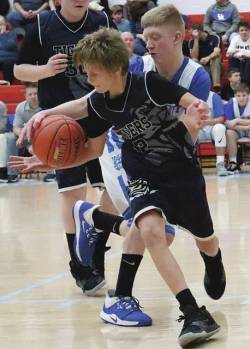 <p>John Henson | Harlan Enterprise</p> <p>Black Mountain’s Reggie Cottrell and Rosspoint’s Blake Hensley battled for the ball in county tournament action on Saturday. The championship game has been moved to Feb. 14 because of flooding across the county earlier this week.</p> 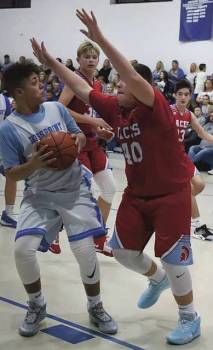 James A. Cawood and Rosspoint advanced to the finals of the seventh- and eighth-grade county tournament with semifinal victories Tuesday at James A. Cawood.

Blake Hensley tossed in 13 and Samuel Henson added 11 as Rosspoint coasted past Wallins 60-32.

Rosspoint will play James A. Cawood on Feb. 14 at 7 in the championship game at Harlan County High School. Wallins will play Cumberland at 5:30 for third place. The games were moved from Thursday due to flooding across the county.