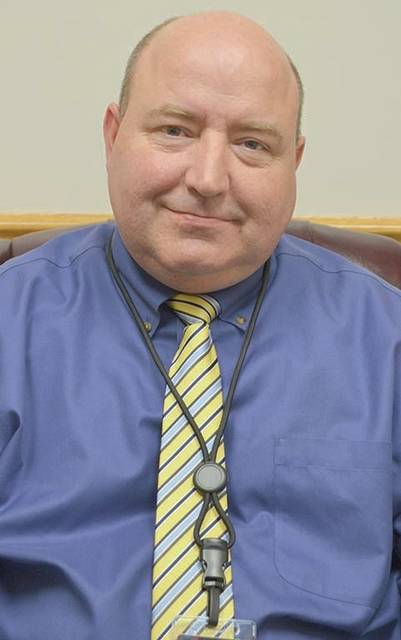 Whitaker is a retired Kentucky State Police detective. He has served with the FBI Task Force on public corruption and KSP Drug Enforcement Special Investigations. He graduated with from the KSP Academy in Frankfort in 1999. He was then assigned to Post 10 in Harlan.

Roark said, “I am excited to have someone of his expertise and quality in this position. He is well versed in law enforcement. He will be able to enhance school security and safety at all of our facilities. This is another step to help protect our students and staff.”

Whitaker will be challenged with his new role to implement all aspects of Senate Bill 1 which was enacted last year by the Kentucky General Assembly. That bill places many additional requirements on schools and districts across the state. He will also run the district’s alternative school.

“He is a great asset to our district and another valuable resource for our schools,” said Roark. “His experience with Kentucky State Police, the FBI, he will continue to establish strong bonds with these agencies and the Harlan County Sheriff’s Department.

Whitaker said he is looking forward to his new position, specifically noting he wants to work closely with students with a goal of having impact of change on student

He holds several awards earned during his law enforcement career including the Ernie Bivens Award as the outstanding cadet of his 1999 KSP academy class, the 2016 KSP DE/SI East Detective of the Year, and the 2018 KSP Post 10 Big Brother Award, for mentoring and assisting personnel new to the profession.

“I have thoroughly enjoyed my career with the state police,” said Whitaker. “I heard of this position here. I was ready for a change of pace. After having a career in law enforcement, I think it will be a nice thing to be able to help young people… to pass my knowledge on to them about what I’ve seen and hopefully help to influence their lives positively. I hope to help people not make poor choices. I want to be a positive role model for them. I think I will really enjoy working with kids.“

Whitaker said he had considered a career in education early on, but his father encouraged him to pursue a career with the Kentucky State Police because of the opportunities.

Now, with his new position, he will be able to have done both in his career.

“I’ve seen some horrible things,” said Whitaker. “But, I’ve met some great people. When you are from here you have a better understanding what people face, what families face. The toughness of the people in the mountains is well known. There is an element of toughness in the mountain people but I’ve also see how hospitable and nice mountain people are. I’ve not only worked here, but I’ve grown up here.

“I am ready to see people at their best. My time in the state police, I’ve seen people going through some of the worst times in their lives. I’m ready to see young people go through the best part of their lives and to have a part in that. I feel like everyone in this country should have an opportunity to feel safe in school and to be able to learn in an environment where they aren’t afraid to be.

“Through my career, I’ve been at a lot of places where tears were being shed. I’ve responded to very few homes where there were tears of laughter. It is a welcome change to me to hear kids laughing and seeing them have fun. Having bene a trooper, it is nice to hear kids laugh.”

Whitaker is familiar with the district’s schools, having been involved in various intruder trainings with faculty and staff and with lockdown drills. He has a child who is a graduate from Harlan County High School and two who are currently attending HCHS.

A resident of Cumberland, he is a graduate of Whitesburg High School and Southeast Community College. He holds an associate degree in business.

Prior to joining the KSP, he held several jobs, including a clerk at IGA in Cumberland, the SECC business office on the Cumberland campus, Frito Lay, Tetra chemical Company where he freeze proofed coal and also data and job order entry at Irotas Manufacturing in Shelbyville

His hobbies include hunting, fishing, being outdoors and spending time with his family.

He and his wife Christy, the school district health coordinator and Rosspoint school nurse, have three children – Makayla, Carlye and Cullen. He attends Dione Baptist Church.