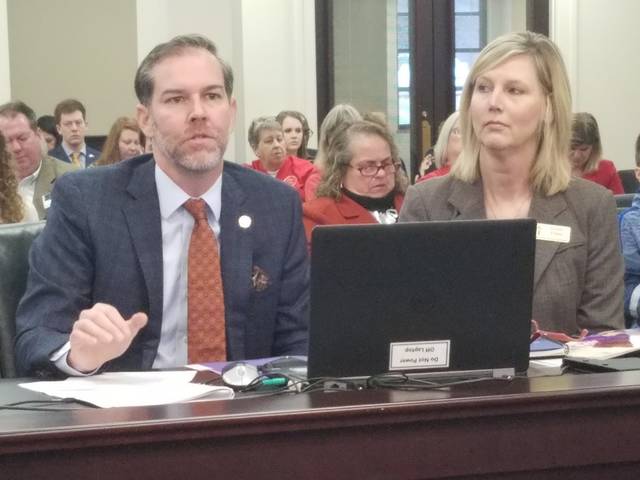 FRANKFORT, Ky. (KT) – A Senate bill requiring school resource officers to be armed while on duty cleared a House committee on Tuesday.

That provision is just one of many that appear in the legislation, sponsored by Sen. Max Wise, R-Campbellsville, which he described to the House Education Committee as School Safety 2.0, referring to a bill approved during the 2019 General Assembly.

During his appearance before the House Education Committee, Wise said, “We want to make sure that our schools are secure with the appropriate personnel within those school walls, so Senate Bill 8 says that school resource officers shall be armed with a firearm. We did not go down the path last session of arming teachers, we did not go down the path past session of arming volunteers. But we did say we would have sworn law enforcement officers as SROs within our school walls.”

One change from last year was to change the requirement of an SRO for each school to one for each campus, since some districts have more than one building co-located in the same area.

Wise says his goal of one mental health professional adult for each 250 students, also includes counselors, social workers and psychologists.

Linda Tyree, a counselor in the Butler County Schools, testified, “We know that mental health, just like our academics, is crucial, and that it is foundational to our students.”

There were some concerns about the effect armed SROs would have in some neighborhoods, but Wise pointed out a survey taken in the Jefferson County Public Schools in December, which included over 2,500 teachers and staff members, indicating 90-percent support for armed SROs in schools.

“I think the survey speaks for itself,” he said. “If we are going to have sworn law enforcement officers in schools, I think it is the expectation that they not have a slingshot, but they have a firearm.”

Keturah Herron with the ACLU of Kentucky spoke against the measure.

“SROs are still police, and will detain, handcuff and arrest, as they are trained to do,” Herron said. “SROs do not always understand the behavior of disabled students and may respond with more aggressive measures when they are armed.”

While several committee Democrats either “passed” or voted against the measure, saying local districts should decide whether to arm SROs, there were enough “aye” votes to send it on to the House floor.

In other action, the committee unanimously approved, with one “pass” vote, a House bill that would ban corporal punishment in schools.

This followed testimony that Kentucky is one of only 19 states that haven’t outlawed the practice, and that there were 284 incidents where corporal punishment was used in 19 Kentucky districts, during the 2018-2019 school year.