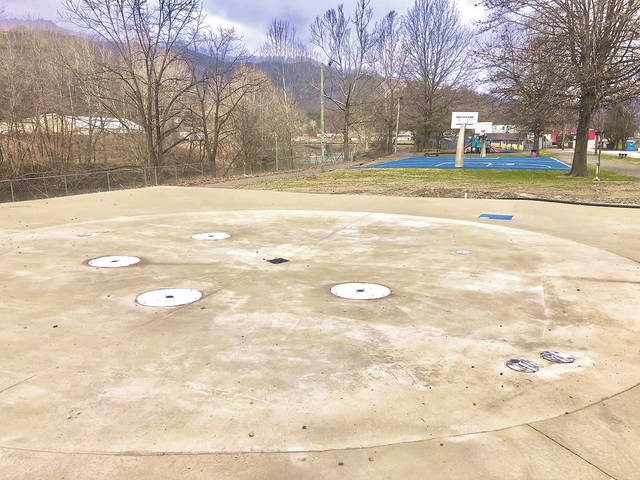 Harlan County Fiscal Court members heard an update on the installments of splash pads going in at Dressen and Verda during a meeting on Jan. 21. Crews will begin working to finish the recreational areas, estimating the pads will be completed around Memorial Day.

Harlan County Judge-Executive Dan Mosley gave an update on the splash pad projects underway in Dressen and Verda during a Harlan County Fiscal Court meeting on Jan. 21. After beginning over a year ago, the projects should be completed just in time for Memorial Day weekend, according to Mosley.

By definition, a splash pad is a public park or recreation area which uses water but has little or no standing water. This is said to eliminate the need for supervision since there is little risk of drowning, making it an appropriate summer activity for small children.

Mosley said the project would have been completed for children to enjoy during the summer of 2019, but the sites were “red tagged” by the Division of Plumbing in Frankfort.

“The contractor was not aware of any requirements they had to do in addition to all the minimum ones they were already required. Therefore, the project went through what we would call a ‘holding pattern’ for several months while the contractor who was awarded the bid was getting all of their non-compliance matters in order,” Mosley told those in attendance.

Mosley said since then, the contractor had to provide architectural designs, get new permits they were not aware of and go through a series of inspections, which are still ongoing. He added a state inspector recently visited Harlan to look at the sites in Dressen and Verda and then gave a “thumbs up for them to proceed.”

“The contractor had put in 14 or 15 of these across the state, however, as seems to be the case around here, whenever you try to do something in Harlan it takes a little longer than everywhere else. For whatever reason that is, I don’t know,” Mosley said lightheartedly. “Those types of red-tape issues caused our kids not to be able to enjoy that over the summer and fall. That is unfortunate, but I’m happy to report that I feel the projects will be complete and we will be able to open them by Memorial Day of 2020.”

Mosley laughed with the rest of the court, remembering in 2019 when he said the sites would be “ready to go” by Memorial Day “but I didn’t specify a year.”

“There’s been a lot of red tape that had to be fought through on this, but I applaud the state’s diligence in this to make sure we get it right. The worse thing that could’ve happened is having these completed and then open them just to turn around and shut them down because something wasn’t done right,” he said. “But the good thing is we’re now ahead of the curve and the contractor has learned a lot through the process as well. We were the guinea pig but we’re going to get there.”

For more information regarding the splash pads, call the judge-executive’s office at 606-573-2600.