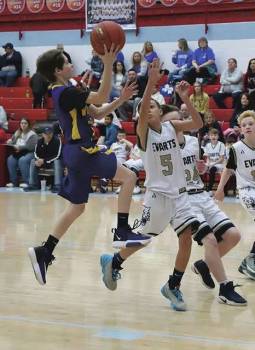 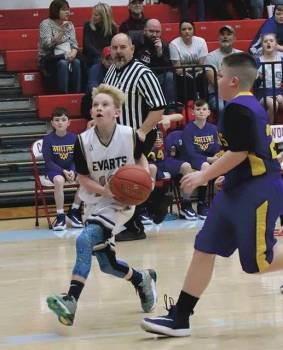 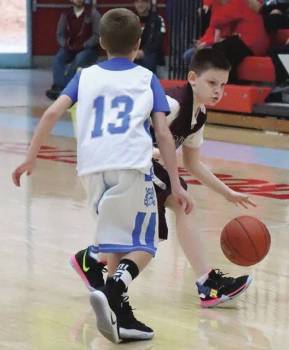 <p>Kim Henson | Harlan Enterprise</p> <p>Cumberland’s Braxton Bowen worked the ball down the court against Rosspoint’s C.J. Maggard in action from the fifth- and sixth-grade county tournament Saturday at James A. Cawood Elementary School.</p>

The top four seeds moved on with double-digit wins Saturday in the opening round of the county fifth- and sixth-grade tournament at James A. Cawood Elementary School.

Rosspoint raced to a 24-6 lead after one quarter in the opening game on the way to a 51-12 win over Cumberland.

Hayden Grace scored seven to lead the Redskins, who finished the season at 0-17.

Tanner Daniels led Wallins with eight points. The Devils finished the sason with a 5-11 record overall.

Jake Brewer and Ethan Shular each scored 11 points as Cawood (14-4) advanced with a 35-13 rout of Black Mountain.

Ethan Huff poured in 22 points to lead Green Hills, which finished the season with a record of 3-14.