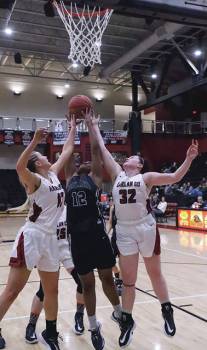 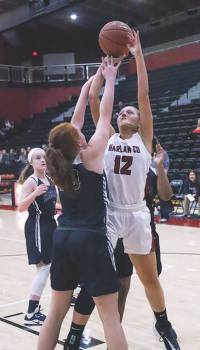 <p>Kim Henson | Harlan Enterprise</p> <p>Harlan County’s Kassy Owens went up for a shot in Wednesday’s game against visiting Hazard. The Lady Bears dropped to 8-8 on the season with a 62-50 loss.</p>

In a season with no clear-cut favorites, the Hazard Lady Dogs like their chances of representing the 14th Region at the state tournament for the first time since the late 1990s, especially if they can show the patience and balance on display Wednesday in a 62-50 win at Harlan County.

“We struggled shooting too quickly in some games, and the last few games we’ve done a lot better,” Hazard coach Larry Caudill said. “We really struggled the other day against Wolfe County, but we played much better tonight, like we did against Clay County. The girls transitioned real well tonight on defense. Harlan County made some good runs against us but we responded.”

Guards Hayley Caudill and Kailee Mullins each scored 18 to lead the Lady Dogs, who improved to 10-6. Mullins scored her points from the outside on five 3-pointers while Caudill hurt the Lady Bears with penetration and putbacks. Taylor Riley, a 5-9 senior forward, added 15 points and tied Caudill for the team lead with six rebounds.

“We have real good balance with three girls who have averaged double figures their entire careers,” Caudill said. “I think any of the top six teams in our region could win it. We’re just trying to prepare until that day comes.”

“They are quick and have some good shooters,” Harlan County coach Debbie Green said. “I’m still disappointed because I think we can play better. We have to have more effort. We aren’t playing real hard at times. I’m used to seeing more effort from our teams. This is a good group that works hard, but they have to give more effort in games.”

The Lady Bears turned the ball over six times in the opening quarter and fell behind 11-6 even though Hazard struggled on offense early, missing nine of 13 shots. The struggles did not continue in the second period as the Lady Dogs connected on eight of 11 shots, including three 3-pointers by Mullins, as the lead grew to 30-17 by halftime.

Another Mullins trey extended the Hazard lead to 19 midway through the third quarter. HCHS fought back to within 12 behind Blakley, but Hazard reeled off six unanswered points in the closing seconds thanks to the Lady Bears’ continuing turnover issues and led 48-30. HCHS had eight turnovers in the quarter and 18 for the game.

An 18-point deficit with 4:22 left was cut to eight with 1:14 to play as Hoskins hit a pair of 3-pointers in an 11-1 run. The Lady Bears couldn’t get any closer as Hazard scored the final four points while the Lady Bears missed several opportunities.

Harlan County returns to action Saturday at home against Perry Central in a 3 p.m. game