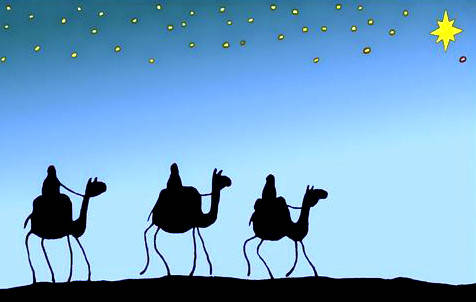 You may wonder why this article is about the Wise Men now that Christmas is over. While it is a popular Christmas card manger scene to put wise men in the picture along with shepherds and angels, they actually showed up at an unknown time and place after Jesus’ birth, so the topic is still timely.

Let’s start with a Biblical review: Mathew is the only one of the gospel writers to mention men he refers to as Magi coming out of the east seeking a Jewish king to worship (Matthew 2: 1-12). “Magi” is one of several titles these guys were given, along with “wise men” and “kings”. So who were they exactly? The book of Matthew was originally written in Greek, and the Greek word used was “magoi”, which in English is translated as “Magi”.

People called magi first appear in history around the 7th century B.C in the Median empire. They were an ancient priestly caste dwelling somewhere in the Parthian empire and practiced astrology, which at the time was a mixture of scientific observation of the heavens mixed in with using those observations to interpret future events. They were also known for their ability to interpret dreams. At the time of Jesus’ birth, the magi were councilors in the Parthian empire.

And since they delved in science and served as councilors to the government, it is easy to see why they were also termed “wise men”. But were they kings? Part of their duties as government councilors included the election of new kings to the empire. So while they were pretty high up on the societal peg, they were likely not kings, but instead king makers.

Matthew describes them as “from the east”, which fits just fine with their being from the Parthian empire, which was beyond the eastern frontier of the Roman Empire. Matthew does not state how many men there were, so why three was adopted as their number is unknown. All that is known is that Matthew used a plural name, so there were at least 2, and the debate varies from two to as many as eight

So now we come to when did they find Jesus? Matthew states that the magi entered a house (2:11) and does not reference a manger, so it’s likely that they came at another time and place. The leading argument is that Jesus was between 41 days (after Jesus was presented to the Temple in Jerusalem), and two years (the Magi told Harod that the star had appeared two years before their arrival). The day of Epiphany (January 6) is also in the mix, known as Three King’s Day, which celebrates the wise men’s visit to the baby Jesus.

Facts about the wise men are trivial. What is important to understand is that God revealed the identity of Jesus as Messiah and King to scholars who were gentiles, a sign that he came for all people.

By Judith Victoria Hensley Plain Thoughts In the past, if a person used the phrase, “artificial friends,” they were referring... read more