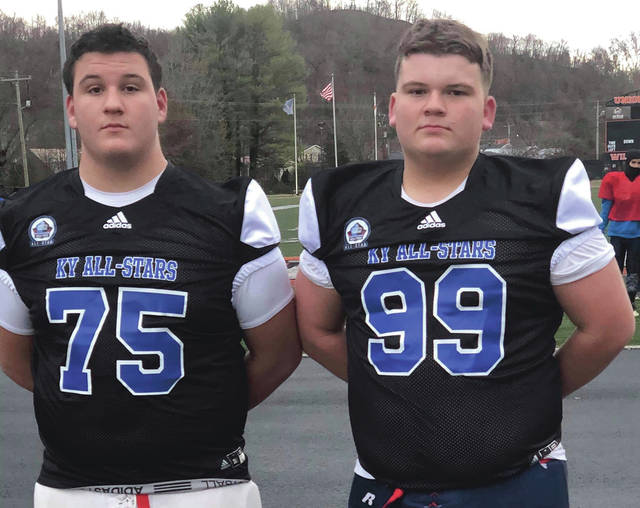 New Harlan standouts Jacob Shoemaker (left) and Will Cassim have been selected for the Pro Football Hall of Fame 8th Grade All-American Bowl Game on Jan. 25

Christmas 2019 will be hard to top in future years for New Harlan linemen Will Cassim and Jacob Shoemaker, who received letters on Dec. 25 from the Pro Football Hall of Fame inviting them to be among the top 70 eighth-grade football players nationwide to participate in an all-star game a day before the NFL Pro Bowl.

“I couldn’t be any prouder of Will and Jacob,” said New Harlan coach Scott Caldwell. “I know their ability, and the sky is the limit for both these young men. I’m just happy that others are getting to see how good they are. To have two players selected to the top 70 in America is astounding for Harlan County.”

Shoemaker, at 6-foot-2 and 280 pounds, and Cassim, at 6-1 and 275 pounds, helped lead the Patriots to a 7-4 record last fall while earning all-conference honors and catching the attention of coaches around the state, including Pro Football Hall of Fame All-Star Game officials.

Committee officials offered both Shoemaker and Cassim a chance to play for the Kentucky All-Stars, a team made up of 23 standout eighth-graders from around eastern Kentucky. The team practiced at several places around the region and at Eastern Kentucky University field before traveling to Canton, Ohio, to participate in a national tournament in early December.

“They are outstanding young men and phenomenal athletes,” said Mike Nunley, the state director for the Pro Football Hall of Fame Academy. “They are exceptionally talented football players with a big and bright future ahead of them going forward.

Shoemaker and Cassim will report to Orlanda, Fla., on Jan. 22 to begin preparations for the all-star game and will play in the game on Jan. 25 at 6 p.m. They will attend the NFL Pro Bowl Game on Jan. 26

“Will and Jacob have a very bright future, and I can’t wait to watch them perform at the next level and beyond,” Caldwell said. “We could not ask for two better players or young men to represent our state or county.“

Harlan County coach Eddie Creech is looking forward to coaching both in the next four years.

“We are all very proud of their accomplishments on the field, but what some folks may not realize is they are just as impactful off the field,” he said. “They are ‘yes sir’, ‘no sir’ type of young men. They work hard and love the game. I can’t wait to get them two hoss cats in a Black Bear helmet.”