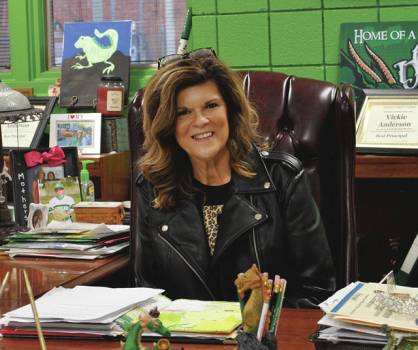 <p>John Henson | Harlan Enterprise</p> <p>Vickie Anderson recently announced her retirement after six years as principal at Harlan Elementary School. Harlan was rated as a 5 Star school in the most recent state test results.</p> 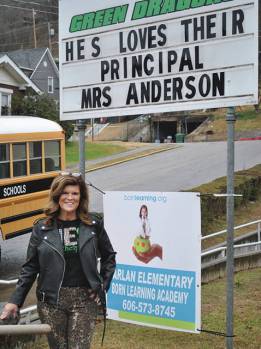 <p>John Henson | Harlan Enterprise</p> <p>Vickie Anderson is pictured outside Harlan Elementary School, where she has served as principal for the past six years. Anderson is retiring after 33 years in education.</p>

A former basketball player in her high school days, Vickie Anderson understands the concept of going out on top. After 33 years in education, including the last six as the principal at Harlan Elementary School, Anderson is going out on top this week as she steps away from the profession to work in private industry.

“I think this is the best job in the state and it’s been an honor to be the principal at Harlan Elementary School,” said Anderson, who followed with a quote from Confucius. “Find something you love to do and you’ll never work a day in your life.”

Harlan Elementary School was recently honored as a 5-Star School, the highest level a school can achieve in testing from the Kentucky Department of Education. Harlan finished among the top 20 of 728 elementary schools in the state and Anderson said the goal is to reach the top 10 next year.

“I tell our teachers they are miracle works because we don’t have some of the things other schools have. We don’t have a lot of technology or money to buy the intervention programs,” Anderson said. “But we do have dynamic teachers and students who strive to be the best. We set the bar even higher for this year, to be a top 10 school, and I have no doubt we’ll get there, even though I won’t be here.”

“Mrs. Anderson has been a true champion for all students during her education career. When I hired her as the principal, I challenged her to work with her staff to make Harlan Elementary the very best,” said Harlan Independent Schools Superintendent C.D. Morton. “Under her leadership, our teachers and students are achieving at levels we have not seen before. Becoming a 5-Star elementary school does not happen by accident. It takes leadership, vision and determination, which are all qualities Mrs. Anderson embodies. Her work ethic is second to none and she has done a tremendous job of cultivating a culture where students and staff members can really excel.

“Being an effective school principal is very hard work. Mrs. Anderson led by example and poured her heart and soul into loving, supporting and encouraging everyone around her. As a result, everyone accomplished more than they ever thought possible. She has been an amazing advocate for low-income students, first making sure their basic needs are met and more importantly helping them believe they can perform just like all other students. She has done a remarkable job of blending toughness and compassion in a way that makes those around her give their best.”

“Vickie Anderson is the hardest working person I know. She has dedicated herself to Harlan Elementary whole heartedly and we owe much of our success to her leadership,” said kindergarten teacher Lisa Nelson, who has worked at the school for over 30 years. “She set an example for all of us and pushed each of us to reach our potential as educators.”

A 1982 James A. Cawood High School graduate, Anderson earned degrees at Eastern Kentucky University, Union College and Lincoln Memorial University before beginning her career in education at Cawood Elementary School. She then taught four years at Harlan before moving to Florida for two years. She returned to Harlan County in the 1990s and taught at Green Hills for one year before beginning a 20-year run as the counselor at Harlan Elementary School. She took over as principal in January of 2014 and initiated her efforts to transform the school, beginning with a change in culture.

“We do all kinds of things to build character and promote students. To me, the No. 1 thing in being a great school is school culture,” Anderson said. “If you don’t have a great school culture, it’s impossible to get there. It took me about four years to realize if you don’t have your culture, everyone working together promoting students and being positive, you cannot get there.”

Teacher leadership, according to Anderson, is another key to the school’s success.

“They are experts at what they do and they share what they do with their peers and learn from each other,” Anderson said. “We also share a common vision and goals and have high expectations for everyone. We also do ongoing professional learning.”

Morton said the district would appoint an interim principal for the remainder of the school year.

“The position will remain open for candidate applications and the elementary school site-base decision making council (SBDM) will review those in April,” he said. “We plan to begin the selection process in early May so that the next leader is in place and can begin work during the summer. We are anticipating plenty of interest in the position later in the school year. We believe people are attracted to excellence and a strong leader will be eager to lead one of the commonwealth’s 5 Star elementary schools.”

Anderson will move on to a job at SEKRI, where she will work in educational training and job coaching for adults.

“I’m ready for a change, a new challenge in the private industry,” Anderson said. “This is bittersweet. This is the hardest job I’ve had, but the most rewarding. I love these kids and it’s hard for me to imagine doing anything else. It will be difficult to leave, but I feel this school is bigger than any one person. I was just part of the team.”