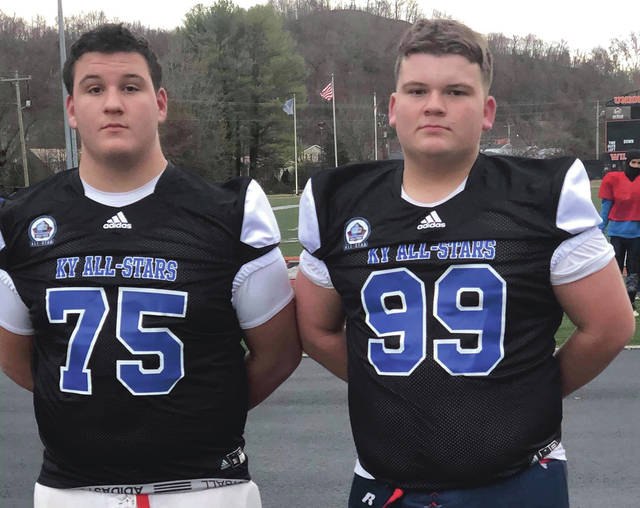 New Harlan standouts Jacob Shoemaker (left) and Will Cassim are members of the Kentucky All Stars and will play in a tournament with this week at the Pro Football Hall of Fame complex in Canton, Ohio.

Jacob Shoemaker and Will Cassim stood out on football fields this past season in leading New Harlan to a conference title, both for their size and for their performance.

Shoemaker, at 6-toot-2 and 280 pounds, and Cassim, at 6-1 and 275 pounds, were usually the most imposing players on the field and led the Patriots to a 7-4 record while earning all-conference honors and catching the attention of coaches around the state, including Pro Football Hall of Fame All-Star Game officials.

Committee officials offered both Shoemake and Cassim a chance to play for the Kentucky All-Stars, a team made up of 23 standout eighth-graders from around eastern Kentucky. The team has practiced at several places around the region and will also practice on the Eastern Kentucky University field before traveling to Canton, Ohio, to participate in a national tournament on Dec. 6-9.

“They are outstanding young men and phenomenal athletes,” said Mike Nunley, the state director for the Pro Football Hall of Fame Academy. “They are exceptionally talented football players with a big and bright future ahead of them going forward.

New Harlan coach Scott Caldwell said the all-star tournament is a nice reward for both of his standout linemen.

“We are extremely proud of Will and Jacob. They are representing our team, county and state,” Caldwell said. I could not ask for two better young men or two better football players to represent our team and county. Their outstanding athletic ability and the high level of character that these young men have make them outstanding football players. Both Will and Jake will be very successful in football and in life. In my 25 years coaching the sport, they are two of the best I’ve had the opportunity to coach or watch. Our entire program and county wish them the best of luck and know that they will both be a valuable asset to any team representing our state.”

Caldwell expects both of his all-star linemen to have an impact in high school, perhaps as soon as next season as freshmen. Nunley agrees, noting he expects to see both “playing on Saturdays” after their high school careers end.

“I haven’t seen many linemen with their skill set and abilities,” Nunley said. “They would probably be starting at most high schools.”