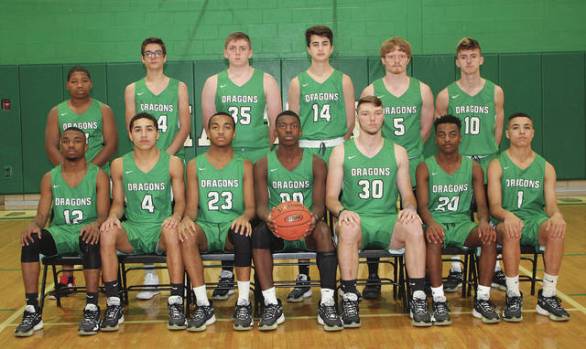 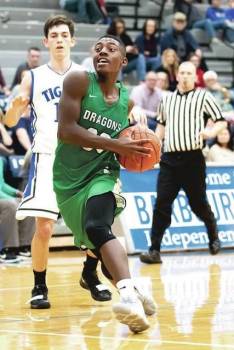 <p>Photo by Les Nicholson</p> <p>Harlan guard Jordan Akal is among the state’s top-rated players in the Class of 2022. He averaged 17.2 points per game as a freshman.</p>

There are two ways to look at the Harlan Green Dragons heading into the 2020 season.

The pessimist would call them small and inexperienced.

The optimist would probably choose quick and athletic.

Coach Derrick Akal won’t argue with either description, knowing his young Dragons will go through plenty of growing pains before becoming the team he hopes to see heading into postseason play.

“I know it’s cliche, but the key for us is getting better every day and we have. I don’t think we’ll really know what kind of team we have until midseason after we get some experience,” said Akal, who led the Harlan Lady Dragons to a pair of 13th Region titles. “We have to learn how to play with each other. It’s a totally different makeup from last year and a totally different style of team. We’ll be able to get up and down the floor.

Harlan lost three starters and six seniors from last year’s 20-13 squad, the most successful team at the school since the 2000 Dragons advanced to the regional final four and played in the All “A” Classic state semifinals.

This year’s squad will take an entirely different approach with more of a pressing style built around four sophomore guards, all 6-foot or smaller.

“I think our strength is our athleticism. We’re quicker and more athletic than we were in the past,” Akal said. “We are getting closer to being positionless because we have a lot of guys who are interchangeable. I also like the fact most of these guys have close to 90 games before they graduate to continue to get better.”

Harlan’s lack of height could be a problem, Akal notes, especially against taller and more physical teams.

“We’re not a very big team,” he said. “Our lack of experience could show up in a lot of ways, including being in the right place on defense.”

Sophomore Jordan Akal, the coach’s son, is heading into his third season as the starting point guard following a breakout freshman campaign that saw him average 17.2 points and 3.9 rebounds per game to earn a ranking as one of the state’s best in his class.

“He’s put in a leadership position now, so I’m looking for him to be a leader and continue to progress as a basketball player,” Akal said. “He may be a sophomore academically, but with the amount of basketball he’s played in high school and in AAU he has played as much as any junior or senior in the region.”

Jon Eldridge, a 6-4 senior who averaged 9.6 points and 8.4 rebounds per game last year, will be counted on to provide the bulk of Harlan’s post scoring and rebounding.

“Jon was a great rebounder last year, but we are looking for him to continue improving and provide more scoring,” Akal said. “He has put on 10-15 pounds of muscle. We expect him to be a defensive presence and a rim protector. You can put more pressure on the ball when you have a guy behind you to protect the rim.”

The other starting jobs will likely be filled by sophomores Jaedyn Gist, Kaleb McLendon and Johann Gist. Jaedyn Gist and McLendon will join Akal in the backcourt after seeing extensive action off the bench a year ago.

“Kaleb is a real smart basketball player. He’s very energetic and intense and tough. He has improved so much over the last year and a half,” Akal said. “Jaeden is intense and a good rebounder and passer. He brings some toughness to the team. That experience from last year will help both of them. They both have gotten stronger. We think they will both provide some scoring.”

While Akal is listed as the point guard, McLendon and Gist will handle the ball quite a bit also.

“I think it makes it tougher on any man-to-man defense,” the Harlan coach said. “I like having several guys who can handle the basketball.”

Johann Gist is a tremendous leaper who will be counted on to help Eldridge on the boards and play a big role on defense.

“He’s a great athlete who is improving and getting better,” Akal said. “He’s a good shooter. We will look for him to provide a defensive spark.”

Charles David Morton, a senior, will be counted on to provide a 3-point threat off the bench, a role he filled admirably during summer play.

“That’s what he will provide. Charles is an excellent shooter,” Akal said

Jayden Ward, a 5-10 sophomore who played at Harlan County last season, will provide depth at forward, while 5-8 freshman Kyler McLendon will be a reserve guard.

“We’re looking for Ward to provide us some toughness, defense and rebounding. Anything after that is a plus,” Akal said. “Kyler is one of our more talented guys with a lot of potential. He has grown some and gotten stronger.”

“Bryson and Barnes will see some minutes. We are looking for them to give us some shooting off the bench,” Akal said.

Harlan has finished as the regional All “A” Classic runner-up twice in the past three years and will be among the top contenders this year, along with Williamsburg, Barbourville and Middlesboro.

“I don’t know where we will be in January, but I know we will compete every day,” Akal said. “I don’t know if there is a huge gap between one and five in the region and the same is probably true for six to 10. I think we can compete with most teams on any given night.”

The Dragons have been district runner-up each of the past three seasons, finishing second to Middlesboro last year after falling to Harlan County in the finals the previous two years. Akal expects another competitive district race this season.

“Harlan County beat some good teams this summer, so you’d have to put them No. 1, even though Middlesboro beat them last year,” Akal said. “It’s a tough district, but we definitely think we have a shot, especially if we continue getting better.”