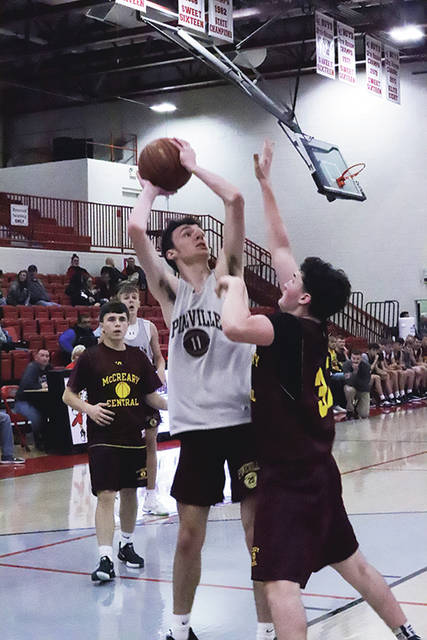 Pineville junior forward Sean Phipps went up for two of his 22 points on Friday in the Lions’ 72-53 win over McCreary Central in the G.J. Smith Showcase at South Laurel High School.

LONDON — Pineville had an impressive final warmup for it season opener next week with a 72-53 win over McCreary Central on Saturday at South Laurel High School in the G.J. Smith Showcase.

The Lions won three of four quarters of the scrimmage with an effective inside-outside attack featuring Phipps dominating around the basket. Senior forward Landon Couch also played well inside, scoring four of his eight points in the opening period as Pineville outscored the Raiders 16-11. Mason scored six for the Lions.

Mason had six more points in the second quarter while Phipps added five as Pineville outscored McCreary 17-11 for a 33-22 halftime advantage.

Phipps took over in the third quarter with nine points as the two teams played to a 16-16 tie.

Goodin scored seven and Phipps added six as the Lions won 23-15 in the fourth quarter.