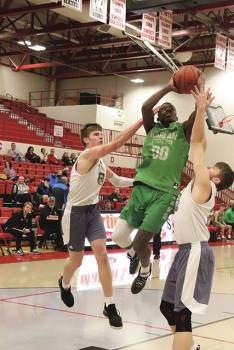 <p>Kim Henson | Harlan Enterprise</p> <p>Harlan sophomore guard Jordan Akal worked inside for two of his 49 points on Friday in the Green Dragons’ 89-56 win over Garrard County during the G.J. Smith Showcase at South Laurel.</p> 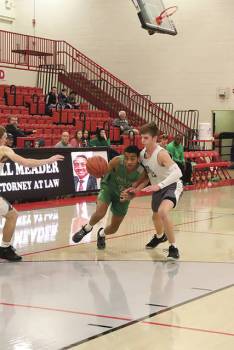 LONDON — With a quick and athletic lineup featuring one of the 13th Region’s top players, the Harlan Green Dragons are more than capable of offensive explosions during the 2020 season.

The Dragons showed off their shooting potential on Saturday in the G,J. Smith Showcase at South Laurel High School, hitting 11 3-pointers in coasting to an 89-56 win over an outmanned Garrard County.

Sophomore guard Jordan Akal, one of the top-rated players in the 2022 class in Kentucky, hit seven 3-pointers in a 49-point effort to lead the Dragons. Kaleb McLendon, also a sophomore guard, added 14 points on four 3-pointers. Senior guard Charles Davis Morton came off the bench to add 12 points on four treys.

McLendon hit a pair of 3-pointers in the opening three minutes, then Akal reeled off five straight points as Harlan raced to a 15-3 lead. A Morton trey and Akal three-point play pushed the lead to 24-5 after one quarter.

Two more 3-pointers by Morton gave the Dragons a 30-7 lead, Brayden Sebastian, who led Garrard with 20 points, scored four straight as the Lions pulled within 14 before Akal heated up again, hitting two 3-pointers as the lead grew to 44-27 by halftime.

Akal opened the second half with five straight points, then added a dunk for a 23-point advantage. Morton and McLendon each hit 3-pointers as Harlan stretched its advantage to 66-40 going into the final period.

Akal hit three more 3-pointers in the fourth quarter as the Dragons outscored Garrard 23-16 in the period.

Harlan will opens its regular season schedule Monday at Barbourville.