Trojans down Rosspoint to win tournament 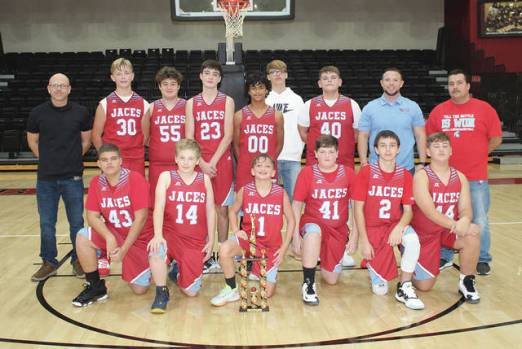 <p>John Henson | Harlan Enterprise</p> <p>The James A. Cawood Trojans are pictured with the championship trophy after winning the Black Bears Preseason Shootout title on Saturday with a victory over Rosspoint in the finals.</p> 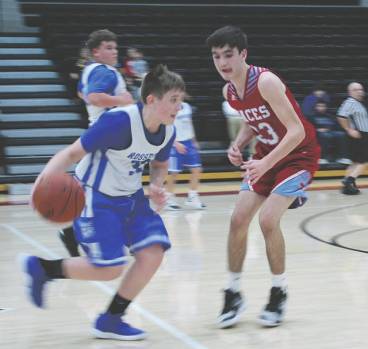 <p>John Henson | Harlan Enterprise</p> <p>Rosspoint’s Brody Napier worked against Colby Johnson, of James A. Cawood, in action from the Black Bears Preseason Shootout on Saturday. JACES won the tournament title with a 35-29 victory over Rosspoint in the finals.</p>

James A. Cawood coach Kyle Jones is slightly superstitious, like many coaches, and wasn’t sure he wanted to take a team photo to celebrate the Trojans’ championship at the Black Bears Preseason Shootout on Saturday at Harlan County High School. Jones remembered the Trojans won last year’s tournament with a victory over Rosspoint in the finals but then fell to the Wildcats in the county tournament finals. Those two teams appear to be the early favorites once again after coasting into the championship showdown.

Jones eventually consented to the trophy photo after the Trojans posted a 35-29 victory over Rosspoint in a game that was close all the way until JACES pulled away down the stretch. Guard Ethan Rhymer scored six of his eight points in the fourth quarter. James McMillian led the Trojans with nine points.

James A. Cawood advanced to the finals with a 42-23 win over Wallins. Rhymer led the Trojans with 13 points.

Rosspoint rolled past Cawood 50-19 led by by Colby Johnson with 13 points.

Wallins rallied in the second half for a 26-17 win over Cumberland. Lane Grubbs scored eight and Connor Daniels added seven for the Devils.