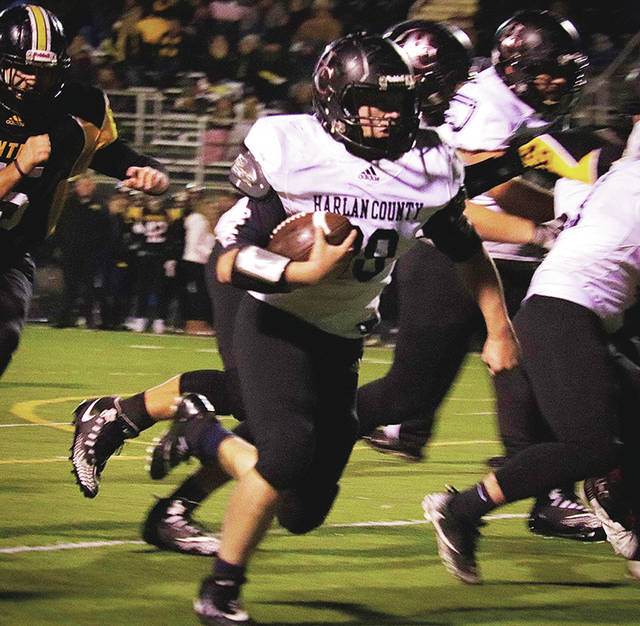 Harlan County senior running back Ben Landis ran for 80 yards and scored a touchdown in the Bears’ 50-6 loss Friday at Johnson Central in the second round of the 4A playoffs.

PAINTSVILLE — Looking for the biggest upset in school history, the Harlan County Black Bears saw their season end on Friday in the second round of the 4A playoffs as Johnson Central continued to roll toward its fifth straight appearance in the state finals with a 50-6 win.

The Eagles scored on all five of their possessions in the first half, plus added a score on special teams, to start a running clock on the way to their 12 straight win to start the season. Johnson Central gained 170 yards on the ground, led by senior tailback Devin Johnson with 131 yards and three touchdowns on only four carries. Senior quarterback Ryley Preece completed five of eight passes for 98 yards, including two touchdown passes for Seth Dalton.

Harlan County closed its season at 8-4 as the District 8 runner-up. The Bears were led by senior tailback Ben Landis with 80 yards on 21 carries, including a touchdown.

The Bears tried to run the clock with a ball-control attack, and coach Eddie Creech gambled by going for it on fourth down numerous times. Harlan County was unable to stop the Eagles whether it was on a short field or not as HCHS struggled to match the speed of Johnson Central.

Harlan County picked up one first down on its opening drive but failed to convert on a fourth down to give Johnson Central the ball on the Eagles’ 49. Johnson scored by running 47 yards on the second play from scrimmage. Jake Headly hit the extra point for a 7-0 lead with 5:27 left in the first quarter.

With the Bears unable to convert on fourth down from their 34, the Eagles needed only two plays to score again as Johnson raced 30 yards. Headly’s extra point pushed the lead to 14-0 with 1:27 to play in the opening period.

The Eagles started their third possession on the HCHS 32 and scored four plays later on Cody Rice’s 1-yard run. Mason Lawson was stopped on the two-point attempt for a 20-0 lead with 9:38 to play in the first half.

Johnson Central scored on special teams when Hunter McCloud blocked a Jordan Steele punt that Owen Lemaster recovered in the end zone. Johnson’s two-point conversion made the score 28-0 with 7:39 left in the half.

The Eagles recovered a fumble on the ensuing kickoff and needed only play to score again as Preece found a wide open Dalton for a 38-yard TD pass with 7:24 to play. Johnson’s two-point conversion started a running clock with a 36-0 lead.

Johnson closed the scoring for the Eagles with a 46-yard run with 1:11 to play in the the third period. Headly hit his fourth extra point for a 50-0 lead.

With Landis and Tyler Casolari handling all the carries, the Bears drove 59 yards in eight plays in the fourth quarter. Landis went in from the 23 for the touchdown with 6:10 left in the game. Jacob Wilson’s pass on the two-point attempt fell incomplete.