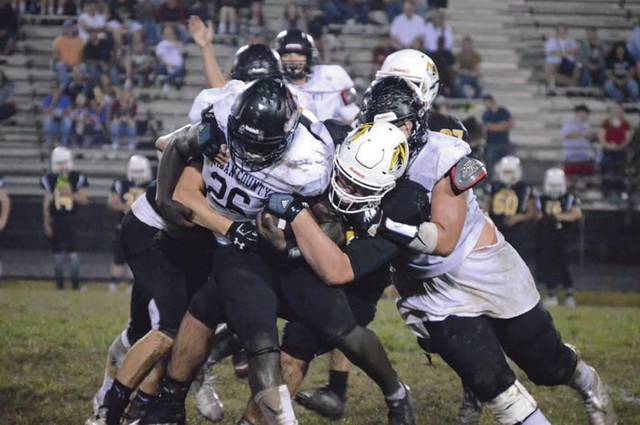 Harlan County running back Demarco Hopkins battled for yardage in action earlier this season. The 8-3 Black Bears will face their toughest test of the season on Friday at Johnson Central in the second round of the 4A playoffs.

When the football realignment for the 2019 season was first announced, the Harlan County Black Bears knew a showdown with Johnson Central would stand between them and a fourth regional title.

The Bears will make the trip to Johnson Central on Friday in a second-round 4A playoff game after both earned wins last week. Johnson Central routed Letcher Central 49-7 and Harlan County coasted past Clay County 53-14. Harlan County will be a big underdog against the 11-0 Eagles, who have outscored their opponents 518-108, including a 56-6 rout of the Bears on Oct. 18.

“I truly believe this Johnson Central team may be the best team I have coached against,” Harlan County coach Eddie Creech said. “With that being said, we are loading up those yellow Harlan County school buses to go win the game and take them down. We need to grind it out on offense and finish drives. Defensively, we are going to need to force some turnovers and limit their big plays. “

The HCHS defense has been good of late, except for the first quarter in a loss at Bell County, giving up 14 points in 11 quarters. The Bears allowed only 39 yards on the ground against Clay County.

“If you take away the first quarter at Bell, our defense has really played lights out the last three games,” Creech said.

Junior linebackers Josh Turner and Hunter Blevins have led the HCHS defense with 73 and 71 tackles, respectively, through nine games. Gavin Ewald is third in tackles, followed by Hunter Helton and Jacob Bailey.

Senior running back Ben Landis went over the 1,000-yard mark for the season as he rushed for 179 yards on 11 carries against Clay County. Tyler Casolari added three touchdowns on the ground. Junior running back/receiver Matt Brown gives the Bears a big-play threat they will need to advance.

Quarterback Ryley Preece, a four-year starter, and running back Devin Johnson have led the potent Johnson Central ground game. Preece has completed 43 of 57 passes for 1,031 yards with 15 touchdowns and only two interceptions. He has added 495 yards and 12 touchdowns rushing. Johnson leads the team with 1,087 yards and 13 touchdowns on the ground. Seth Dalton has 16 catches for 532 yards, and Zach Russell has 11 catches for 224 yards.

While knowing it will take his team’s best game, Creech is confident the Bears can play with Johnson Central if they share his confidence and avoid mistakes.

“We know that if we can put a whole game together as a unit, we can compete with these guys,” he said.